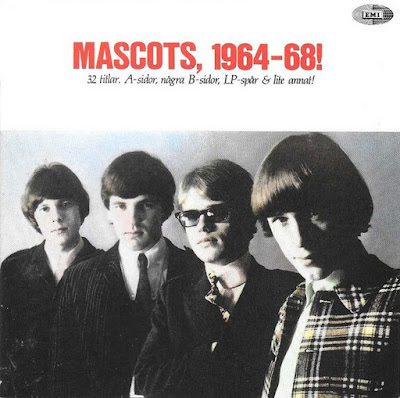 The Mascots were a fairly successful Swedish sixties group, issuing around twenty singles and two LPs between 1964 and 1968, and reaching the Swedish Top Ten with five of their 45s. Although they wrote much of their own material, most of their output was extremely imitative of British Invasion pop, and they (like virtually all Swedish acts of the time) were unknown to the English-speaking world. However, if you're on the hunt for lightweight, but sometimes charming, pseudo-Merseybeat, the Mascots made some pretty enjoyable (and some extremely awkward) tracks along those lines. In particular, the ultra-catchy, close-harmony number "Words Enough to Tell You" is a gem of the genre. As it made #6 in Sweden in 1965 and was included in the best and most widely circulated compilation of Swedish 1960s rock (Searchin' for Shakes), it's the Mascots track non-Swedes are most likely to be familiar with. Alas, none of their other recordings were up to this level, although "A Sad Boy" (another Swedish Top Tenner) and a few other mid-1960s cuts were fair mock Merseybeat. The 1966 single "I Want to Live" was proof that they could get a little tougher and weirder, and has been included on some compilations of rare "freakbeat, " but this direction wasn't explored by the band on other efforts. The Mascots' grasp of English (which they sang in exclusively) was slighter than that of some other Swedish groups, and this—combined with some corny Nordic folk-influenced Merseybeat on some early recordings, and some dull middle-of-the-road pop-folk-rock on their late 1960s releases—makes a compilation of their output erratic and hard to sit through in its entirety.
*******
1. I like my bike 2. Lyckan 3. Baby baby 4. Call me your love 5. A sad boy 6. When I return 7. Stones fell 8. Goodbye 9. For him 10. Walking with my angel 11. Tip of my tongue 12. My very best 13. Words enough to tell you 14. Woman 15. Nobody crying 16. We should realize 17. I don't like you 18. I want to live 19. This proud crowd 20. I close your eyes 21. The girl that you are 22. Did you ever think 23. That's you 24. Since you broke my heart 25. Stewball 26. You could be my friend 27. Tell me lady 28. Moreen 29. Baby, you're so wrong 30. Black and white 31. You're never gonna find me 32. A life like that
The Mascots – aka the Beatwave 'Save the Pirates' Group
***
Posted by: D&J на 21:29