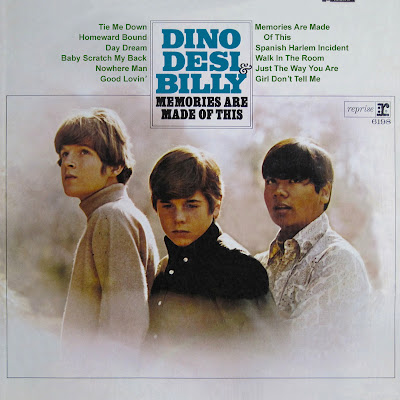 A Hollywood trio that were barely into their teens when they hit the charts in 1965, Dino, Desi & Billy anticipated the bubblegum fad with records that usually featured none of their own contributions, except their characterless vocals. That may be phrasing matters too kindly. The best bubblegum is far more distinctive and catchy than the lowest-common-denominator L.A. session pop/rock that they recorded. But they knew the right people, as they say in the business, which made them stars for a brief time, although they never had an ounce of credibility.

This mid-'60s trio were kind of a cross between the Monkees and Gary Lewis in a few key respects. Like Gary Lewis, their very opportunities to record came about primarily because of their distinguished Hollywood fathers. In the case of these guys, however, the nepotism was rather extreme: Dino was Dino Martin, son of singer/comedian Dean Martin, and Desi was the son of Lucille Ball and Desi Arnaz. Along with classmate Billy Hinsche, they began playing for fun. They'd barely gotten their equipment together when they auditioned for Dean Martin's buddy, Frank Sinatra -- who just happened to record for and run Martin's label, Reprise. By the end of 1964, they'd released their first single for the label, although it was made clear to them that session musicians would handle the instruments.

Top producers and arrangers Lee Hazlewood, Billy Strange, and Jimmy Bowen would oversee the trio's recording dates over the next couple of years. "I'm a Fool" made the Top 20 in 1965; "Not the Lovin' Kind" got into the Top 30 a few months later. None of the group had reached the age of 15 yet, but there they were, playing to screaming crowds as a support act to a Beach Boys tour in 1965, and (for a few months) outselling Sinatra on his own label. This despite (or because of?) the fact that their music was innocuously bland in the extreme, making the Monkees (who also used a pool of L.A. session players) sound positively innovative and hard-nosed in comparison.

Dino, Desi & Billy never got into the Top 40 after 1965, but they recorded singles and albums for years to come (perhaps it would have caused tensions among their families if they hadn't). They were the recipients of compositions by top pop/rock songwriters like Lee Hazlewood, David Gates, Boyce & Hart, Clint Ballard, Jr., and Bonner & Gordon. But it seemed like these songsmiths took care not to give them anything too good, in the manner of Goffin-King's substandard leftovers for early-'60s teen idols.

Billy Hinsche's sister married Carl Wilson, which probably helped the band secure a Brian Wilson composition (which Hinsche helped finish off) for one of their final Reprise singles in 1970, "Lady Love." The group did start to get involved in their recording sessions, as players and composers, toward the end of the '60s. But the talent wasn't there, and in any case the results were much more pop than rock.

Perhaps it's being unduly touchy to come down on the band so hard; they had no aspirations towards anything but wholesome fun, apparently, and 98-percent of other kids their age would have taken advantage of the same connections given the same silver spoons. Keep in mind, though, that bands like Dino, Desi & Billy took away valuable air time and sales from much better groups that really needed it, in an era in which chart considerations were much more vital to ensure an ongoing career. And if you don't believe that, look at the nose dive experienced after the mid-'60s by the Kinks -- who, as it happened, were on Dino, Desi & Billy's U.S. label, and may have been competing for the same promotional budget. 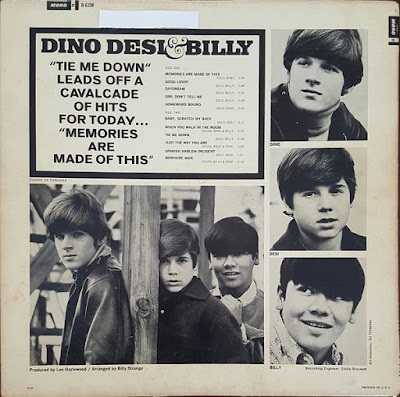