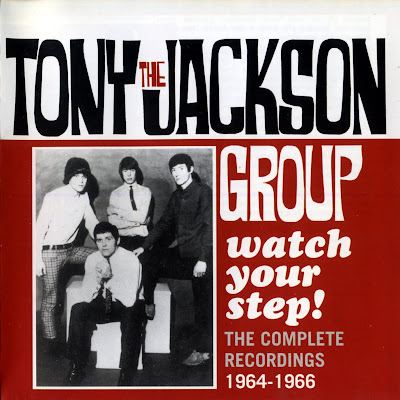 In the summer of 1964, Tony Jackson was considered one of the hottest talents in Liverpool. As bassist and lead singer of the Searchers up to but not including "Needles and Pins" (when John McNally and Mike Pender took over the singing), he was the most recognizable member of the one major Liverpool group not managed by Brian Epstein. He was a genuine star at the time, in a group that was about as hot as any band could be. That all changed when Jackson either left or was forced out of the group (accounts vary) that summer and formed his own band, the Vibrations — from then on, he led a hard-luck life and career.


He was born Anthony Paul Jackson in the Dingle, a densely populated and poor area of Liverpool (the same place whence Ringo Starr and Billy Fury came into the world) in the summer of 1940. He grew up surrounded by working-class aspirations and was planning on becoming an electrician when he was sidetracked, first by skiffle music and later by rock & roll. Skiffle king Lonnie Donegan was his first musical hero and in the mid-'50s Jackson formed his first band, the Martinis, as a skiffle group. By the time he shifted to rock & roll, he was singing lead. According to his successor in the Searchers, Frank Allen, Jackson had a great voice in those early days and commanded the stage in a manner that evoked images of Elvis Presley, and was also a highly proficient bassist. Soon after seeing him perform, John McNally and Mike Pender, who were already playing together as the Searchers, asked him to join. The group, which eventually solidified around the three of them and drummer Chris Curtis, spent a couple of years backing vocalist Johnny Sandon, who left their association to work with the Remo 4, and by 1962 the Searchers were on their own, with Jackson singing most of the lead parts. ~ READ MORE 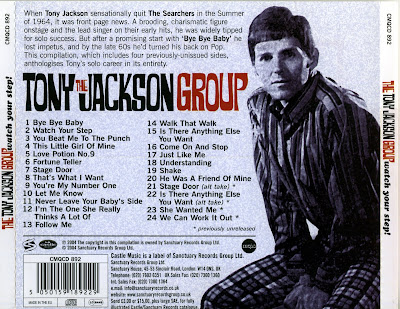 For a long time, the only Tony Jackson collection was Strange Things' Just Like Me, which itself got hard to find not long after its release in the early '90s. This 2004 CD has everything that was on Just Like Me and a bit more. In fact, it's hard to imagine that there will ever be more Tony Jackson unearthed than what's here, as this disc has all 20 tracks Jackson released in the 1960s, along with four previously unreleased alternate takes and outtakes. Unsurprisingly, it sounds rather like (and sometimes much like) the Searchers, since Jackson was their original lead singer. And, to lay it on the line, it's not as good as the Searchers, though it's passable mid-'60s British Invasion music, and occasionally above average. The standout is certainly Jackson's folk-rock arrangement of Mary Wells' "You Beat Me to the Punch" (which liberally cops the guitar line from the Searchers' own arrangement of "Needles and Pins"). The high percentage of unmemorable covers of American R&B-rock tunes marks helped mark him, however, as a performer who didn't have nearly as much of distinction to offer outside of the Searchers as he did within that estimable band. Among the four previously unavailable songs, there's an alternate take of "Stage Door" with a somewhat less elaborate arrangement; an only slightly different alternate of "Is There Anything Else You Want"; the outtake "She Wanted Me" (by an unknown writer), which again recalls a middling Searchers; and an inconsequential jazzy instrumental cover of the Beatles' "We Can Work It Out."