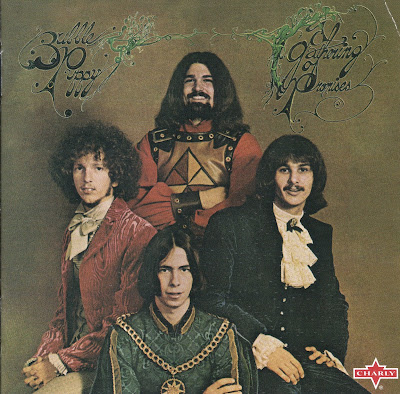 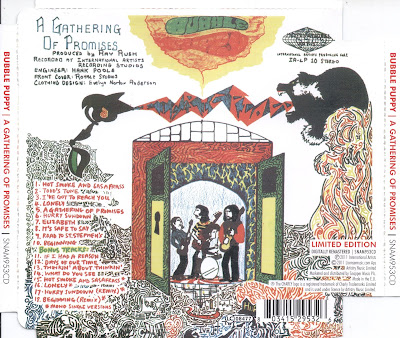 Bubble Puppy (also known as The Bubble Puppy) is an American psychedelic rock band originally active from 1967 to 1972. They are best remembered for their Top 20 hit, "Hot Smoke & Sasafrass".
Bubble Puppy was formed in 1966 in San Antonio, Texas, by Rod Prince and Roy Cox who had previously performed together in the rock group called The Bad Seeds. Looking to form a "top gun rock band" based on the concept of dual lead guitars, Prince and Cox recruited Todd Potter, an Austin, Texas, gymnast, saxophonist and guitarist. With the addition of Danny Segovia and Clayton Pulley, the original line up of Bubble Puppy was complete. The name "Bubble Puppy" was taken from "Centrifugal Bumble-puppy", a fictitious children's game in Aldous Huxley's Brave New World. Bubble Puppy's live debut was as the opening act for The Who in San Antonio in 1967.

After a few line-up changes (drummer Clayton Pulley being replaced by Craig Root, and the departure of Danny Segovia), the final roster for Bubble Puppy settled at Rod Prince and Todd Potter on lead guitars, Roy Cox on bass guitar, and David "Fuzzy" Fore on drums. In the spring of 1967, Bubble Puppy moved to Austin, Texas, and signed a recording contract with Houston-based International Artists, home to the 13th Floor Elevators and the Red Krayola.

The band appeared and toured with many notable artists from 1967-1971. These artists include: The Who, Grand Funk Railroad, Canned Heat, Steppenwolf, Jefferson Airplane, Bob Seger, Johnny Winter and Janis Joplin.

The use of dual lead guitars was pioneered by Bubble Puppy's Prince and Potter, as exhibited in live performances as early as 1967. Two years later, English counterparts Wishbone Ash and the USA's Allman Brothers Band would begin using the same technique with great success.
Bubble Puppy scored a US Top 20 hit in 1969 with their single, "Hot Smoke & Sasafrass". The name was a misheard line lifted from an episode of The Beverly Hillbillies. The single peaked at number 14 on the Billboard Hot 100 in the U.S. and number 15 on the RPM chart in Canada. The song also had local successes, for example, reaching number 6 on WLS. The song was also covered internationally by MGMT, a popular American psychedelic rock band, and by The Mooche in the UK. Cleveland, Ohio, classic rock trio "Pagan Club Orchestra" opened their live shows with a cover version of Hot Smoke and Sasafrass ('our favorite song'). Audiences who had heard the original Bubble Puppy hit were typically ecstatic; one concert-goer raved, "I've been waiting 20 years to hear that song!"

In 1969, Bubble Puppy released their first full-length album, A Gathering of Promises. However, despite Bubble Puppy's early success with the "Hot Smoke & Sasafrass" single, they parted ways with the label in 1970.
Signing Nick St. Nicholas of Steppenwolf as a manager, Bubble Puppy moved to Los Angeles in 1970. Their name was changed to Demian (after Hermann Hesse's 1919 novel at the suggestion of their manager's wife). This was to avoid contractual difficulties with their previous record company but also because the former name appeared to link them with bubblegum music.

The group signed to ABC-Dunhill Records and released one self-titled album in 1971, but its failure to perform on the charts led to financial difficulties with the label and the group's breakup in 1972.

Later years
The members of Bubble Puppy continued to be active in the music industry after the band's demise. Potter and Prince played with Sirius during the 1970s, and Fore drummed with the Texas punk rock band, D-Day, co-writing their cult hit, "Too Young to Date".

When Demian disbanded in 1972, Potter stayed in California, working as a session player, before joining and touring with Rusty Wier's Fabulous Filler Brothers.

Prince bounced around in different bands including Deadhorse Puppy, Manbeast, and The Prince Trio. With the addition of drummer Mark Evans and bassist George Rarey in 1979, Potter and Prince reunited in Sirius.

In 1984, the original Bubble Puppy lineup reunited for performances and recordings, and they released their second LP, "Wheels Go Round" in 1987.

Roy Cox founded The Blues Knights and released two CDs: "Before I Go" in 1999, and "Road To Freedom" in 2001. He formed the NYC Outlaws in September 2007 in New York City, along with Tony Saracene on guitar, Dan Curley on guitar, Cody Willard on guitar, Evan Hammer on bass, and Billy Brooks on drums. Cox died on 2 April 2013.

On March 19, 2011, three of the original members of Bubble Puppy reunited for the first time in 25 years for a performance at The Austin Music Awards. The band also added Mark Miller (guitar) and Jimmy Umstattd (bass) to the line-up. David Fore met the two while playing in Austin cover band the Kopy Kats. Fore and Mark also played together in the mid-1970s in another Austin cover band, Zeus. In April 2013, Gregg Stegall joined the line-up taking Todd Potter's place in the band. Stegall has a long-standing musical affiliation with Mark and Umstattd dating from the early 1970s. David Fore is currently taking a leave of absence with Randall Maxwell on drums since the summer of 2018.

Bubble Puppy's live performances have included appearances at the Texas Legacy Music Awards in San Antonio, Texas (4 September 2011); the Saxon Pub in Austin, Texas (30 December 2011); and Antone's Nightclub in Austin (13 July 2012), and numerous appearances at Threadgill's World HQ in Austin. 2012–2017 finds the band booked in Austin, San Antonio, Houston, Dallas, and Corpus Christi on a rotating basis. The line-up of Rod Prince, David Fore, Mark Miller, Jimmy Umstattd, and Gregg Stegall remains intact. Summer & Fall of 2017 has the band playing in San Antonio in June, Austin & Houston in July, 2 more shows in Austin in August, and back in San Antonio in Sept. for the Psych del Rio music festival. Spring and Summer of 2018 finds the band back in full swing with dates in San Antonio, Corpus Christi, multiple dates in Austin, and Houston in late summer. The band's 50th show, since reformation, will be May 18, 2018 in San Antonio. 2019 again looks promising with 6 shows already booked, including an Austin appearance at the Saxon Pub on Jan. 26th and an appearance at the SWSX music festival in Austin this March.