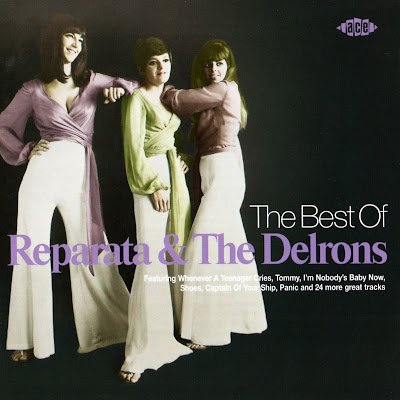 For a group that never made the Top 40, and came along almost too late to exploit the sound they produced, Reparata & the Delrons have proved amazingly durable. Their album haunted used record bins for years, and 18 of their songs cut for World Artists (a label most closely associated with Chad & Jeremy) are available on CD.

Reparata & the Delrons were one of hundreds of girl groups that flourished in the early '60s, and actually had a higher profile than many of their rivals, achieved in their own time by their participation in a pair of Dick Clark national tours and, for years after, from the fact that they actually released a complete LP to accompany their one widely recognized hit, "Whenever a Teenager Cries." That album, Whenever a Teenager Cries, was a low-level collectable piece that was easily found in record store used bins (especially in the northeast) well into the '80s and, in contrast to most other original girl group LPs, only cost $15 to $20. Thus, for 20 years after that album's release, Reparata & the Delrons' music, easier to find and less expensive than, say, originals by the Crystals or Darlene Love, was frequently a first-purchase by lots of people getting into the girl group sound.

The group started out as a quartet in 1962 at St. Brendan's Catholic School in Brooklyn, NY, led by lead singer Mary Aiesen -- the other originals were Regina Gallagher, Anne Fitzgerald, and Nanette Licari. By 1964, Mary Aiese, working under the name Reparata Aiese (the name came from a nun at the school, Sister Mary Reparata), had a new group consisting of Sheila Reillie, Kathy Romeo, and Carol Drobnicki. The quartet was singing at a high school dance when they were spotted by Bill and Steve Jerome, brothers and producers looking for new talent to record.
The Jerome brothers got the group -- reduced to a trio when Kathy Romeo exited -- a record deal with Laurie Records for one single. "Your Big Mistake" passed without notice in the summer of 1964. This was already rather late in the girl group era, and the trio found themselves competing with a tidal wave of British Invasion sounds for attention from DJs. The Jeromes next brought them to the World Artists label in Pittsburgh, PA in late 1964, and they cut a group of songs at their first session that included "Whenever a Teenager Cries."
That song, released in early 1965, became a local success, although it never ascended as high as the Top 50 on the national charts. It was an attractive song in a sort of sub-Angels manner, and got the trio a spot on Dick Clark's Caravan of Stars national tour. Meanwhile, World Artists tried a string of Reparata & the Delrons singles, of which "Tommy" was a modest hit, although their subsequent efforts, including "The Boy I Love," were failures. A complete LP, containing "Whenever a Teenager Cries" and covers of such British Invasion fare as "If I Fell" and "Do Wah Diddy Diddy," was also released in 1965.
By the second half of the year, the Jerome brothers were label-shopping again, and this time the trio ended up at RCA. By the time their debut single on that label was recorded, the group was down to a duo of Mary Aiese and Nanette Licari, Carol Drobnicki having exited rather than embark on another national tour with Dick Clark. Lorraine Mazzola came in to fill the third slot and the trio ultimately cut five singles for RCA over a two-year period, none of which charted, and in early 1967, the group jumped to Mala Records, a division of Bell Records.
The Dick Clark tours ensured that Reparata & the Delrons got seen and heard nationally, even when their records didn't chart. At the same time, the fact that they were based in New York gave the group reason to hope that they might recapture some of their early success and build on it.
Their fortunes picked up a bit late that year with the release of "Captain of Your Ship," the first single to feature Lorraine Mazzola singing lead. It just missed charting in America, but made number 15 in England in early 1968. After three hitless years in America, Reparata & the Delrons found themselves touring England. It was to be a momentary uptick in their success, however, for the group never had a follow-up hit in England. A year later, they were on the Kapp Records label, where they also went hitless for three single releases.
Mary Aiese elected to leave the group she'd founded after five years in the business, turning it and the name "Reparata" over to Lorraine Mazzola. She put together a new group of Delrons and began performing on the oldies circuit, which was becoming a major draw by the dawn of the '70s. In 1973, Mazzola did an album of oldies tunes in a classic girl group style that failed to sell, and Reparata & the Delrons were retired as a name late that year. In 1974, Mazzola re-emerged as a member of Lady Flash, the backup group behind Barry Manilow, and scored a hit a year later with "Street Singin.' Strangely enough, it was Mary Aiese who had the last word as Reparata, reassuming the name and scoring a minor hit in 1975 with her single "Shoes." ~ Bruce Eder, Rovi

1. Boys And Girls
2. Captain Of Your Ship
3. Whenever A Teenager Cries
4. Tommy
5. The Kind Of Trouble That I Love
6. It's Waiting There For You
7. Panic
8. Look In My Diary
9. Do Wah Diddy
10. I Have A Boyfriend
11. I'm Nobody's Baby Now
12. Take A Look Around You
13. Mama's Little Girl
14. I Can Hear The Rain
15. The Boy I Love (Reparata)
16. In My Diary
17. He's My Guy (And I Love Him So)
18. Bye Bye Baby
19. I Found My Place (Reparata)
20. Loneliest Girl In Town
21. I Can Tell
22. (Do You) Remember When
23. Leave Us Alone (The Del-Rons)
24. He's The Greatest
25. He Don't Want You
26. Weather Forecast
27. (We're Gonna) Hold The Night
28. Saturday Night Didn't Happen
29. Why Do Lovers Break Each Other's Heart? (Reparata)
30. Shoes (Reparata)
here have been Reparata & the Delrons compilations before this 2005 release with the bootleg Magical Musical History Tour being the most thorough. This 30-track anthology, however, has the considerable advantage of being an authorized production with correspondingly superior fidelity, as well as a 16-page booklet of historical liner notes with rare photos and comments from Reparata herself. As with every artist where you can't fit everything onto a single CD, there's room for argument on the track selection; one of their better cuts ("Summer Laughter") is missing, and there are a few unimaginative covers of girl group tunes that were hits for other acts. Still, it does include the songs everyone would agree need to be on a best-of ("Whenever a Teenager Cries," "Captain of Your Ship," "I'm Nobody's Baby Now"), as well as a few rarities credited to Reparata alone (and one to the Delrons alone). It still doesn't make an argument for them being among the best girl groups; the material's not always that strong, and the style's often derivative, whether of the Dixie Cups, the Shangri-Las, or other artists and trends. If nothing else, however, it's an impressive feat of cross-licensing, drawing from more than a half-dozen labels. And it does include some tracks that are definitely above average girl group goodies, like the Phil Spector-esque production of Jeff Barry's "I'm Nobody's Baby Now" and the moody, slightly psychedelic-influenced late-'60s obscurities "Saturday Night Didn't Happen" and "Weather Forecast." ~ Richie Unterberger, All Music Guide
Posted by: D&J на 17:48