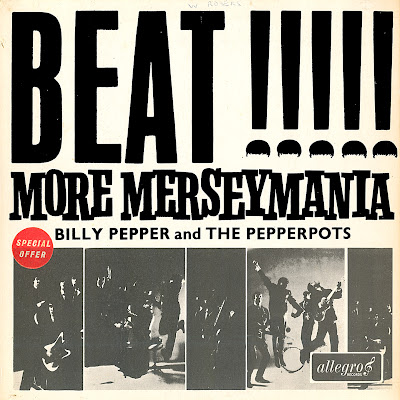 Billy Pepper and the Pepperpots, a “Mersey” band that recorded this albums in 1964 had solid connections to the Beatles. First off, their cover songs are dominated by Lennon-McCartney compositions. Their album artwork consists of either mock Beatle sets, or actual photographs of Beatle audiences.
Most important, however, is that Billy Sheppard, ostensibly a Pepperpots’ member, was also a Beatles insider. Sheppard, you see, penned a number of pieces, often depicting stories of the band's life on the road, for their fanzine. Most important, he wrote the band’s first authorized biography, The True Story of the Beatles. The words at the bottom of the cover read, “As told to Billy Sheppard. (James Oglethorp)
Review by Jason Ankeny allmusic.com
Rumored to include contributions from a pre-Velvet Underground Lou Reed and John Cale during their respective stints on the Pickwick assembly line, Merseymania is thus the most infamous of the myriad exploito records issued at the apex of Beatlemania. While the Knickerbockers' expert forgery "Lies" proved the public would embrace faux-Beatles done right, Billy Pepper & the Pepperpots' leaden melodies and tuneless harmonies are anything but fab. For the most part, the songs merely ape the sound and sensibility of the Lennon/McCartney catalog, but even the two genuine covers ("I Want to Hold Your Hand" and "I Saw Here Standing There") are laughably bad, rendered with all the limited enthusiasm and verve you'd expect from anonymous studio hacks. It's worth noting that Billy Pepper was supposedly the alias of Billy Shepherd, who Beatles conspiracists know as the man who reportedly replaced Paul McCartney following his 1966 death. What? You didn't know McCartney died? Google "Billy Pepper" and "McCartney" and prepare to be blown away — or not.
Merseymania - Billy Pepper & The Pepperspots