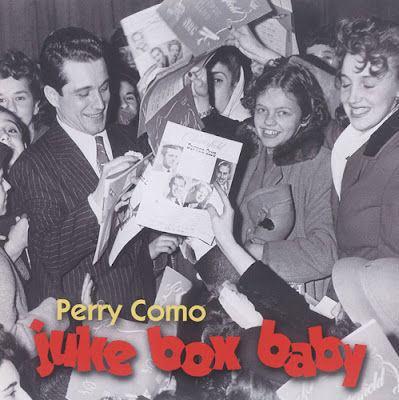 One of the most popular vocalists between the end of World War II and the rise of rock & roll in the mid-'50s, Perry Como perfected the post-big-band approach to pop music by lending his own irresistible, laid-back singing -- influenced by Bing Crosby and Russ Columbo -- to the popular hits of the day on radio, TV, and LP. Both his early traditional crooning style plus his later relaxed manner and focus on novelty material were heavily indebted to Bing Crosby, though Como's appeal during the early '50s was virtually unrivaled. Born in 1912 in Canonsburg, PA, Como was working as a singing barber in his hometown when he began touring with local bandleader Freddie Carlone at the age of 21. By the mid-'30s, he got his big break with Ted Weems & His Orchestra, who headed a popular radio show named Beat the Band. After the orchestra broke up in 1942, Como hosted a regional CBS radio show later called Supper Club. The show's success gained him a contract with RCA Victor Records by 1943, and he also began working in Hollywood with Something for the Boys.
Perry Como's real big break came with the 1945 film A Song to Remember. His rendition of "Till the End of Time" spent ten weeks at the top of the charts and became the biggest hit of the year. Como's dreamy baritone worked especially well on ballads, such as the additional 1945-1947 number one hits "Prisoner of Love," "Surrender," and "Chi-Baba, Chi-Baba (My Bambino Go to Sleep)." Hired by NBC for another radio show in 1948, Como crossed over to the emerging medium of television that same year with the Chesterfield Supper Club. The show quickly took off, and eventually earned him four Emmy Awards. In the mid-'50s, Como began to indulge in light novelty fare, the titles often comprising nonsense words -- "Bibbidi-Bobbidi-Doo," "Hoop-Dee-Doo," "Pa-Paya Mama," and "Hot Diggity (Dog Ziggity Boom)." Though he often disliked the songs, they frequently became huge of the road pop.
Como's breezy songs had worked well at the beginning of the decade, but his appeal began to wane towards the end of the '50s, with the emergence of rock & roll and the wave of teen idols. His last number one hit, "Catch a Falling Star," came in 1958. Como was much less visible during the '60s, but returned in 1970 with his first live show in over two decades, and a world tour followed; a single ("It's Impossible") even made the Top Ten in late 1970. Como continued to record LPs and occasional television specials while making scattered appearances during the '70s and '80s. On May 12, 2001, Perry Como died in his sleep at his home in Florida. 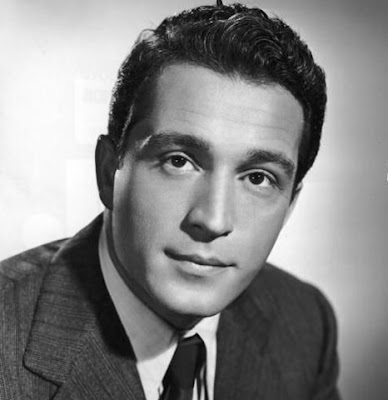 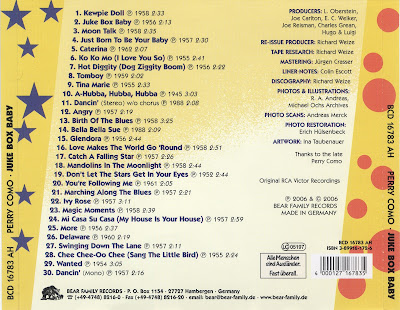 Release Date
Dec 25, 1999
Recording Date
Oct 13, 1945 - Feb 14, 1962
Certainly not a collection of Perry Como's most famous hits (although "Don't Let the Stars Get in Your Eyes," "Hot Diggity (Dog Ziggity Boom)," and "Magic Moments," and "Catch a Falling Star" are all found here), Juke Box Baby contains 30 tracks (including two versions, one mono and one stereo, of "Dancin'"), mainly from the 1950s, but also sneaking into the '60s and '40s, and even into 1988 ("Bella Bella Sue"). This is certainly not the album for someone wishing to start his Perry Como collection, but it's an OK choice for someone already familiar with him.
Posted by: D&J на 01:35