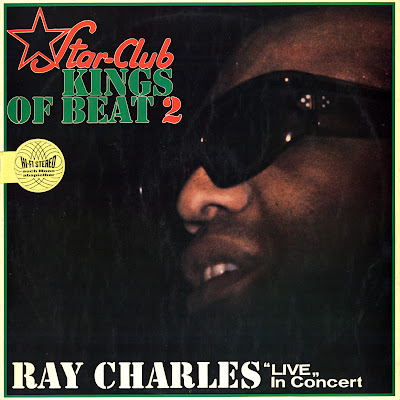 Ray Charles was the musician most responsible for developing soul music. Singers like Sam Cooke and Jackie Wilson also did a great deal to pioneer the form, but Charles did even more to devise a new form of black pop by merging '50s R&B with gospel-powered vocals, adding plenty of flavor from contemporary jazz, blues, and (in the '60s) country. Then there was his singing; his style was among the most emotional and easily identifiable of any 20th century performer, up there with the likes of Elvis and Billie Holiday. He was also a superb keyboard player, arranger, and bandleader. The brilliance of his 1950s and '60s work, however, can't obscure the fact that he made few classic tracks after the mid-'60s, though he recorded often and performed until the year before his death.
Blind since the age of six (from glaucoma), Charles studied composition and learned many instruments at the St. Augustine School for the Deaf and the Blind. His parents had died by his early teens, and he worked as a musician in Florida for a while before using his savings to move to Seattle in 1947. By the late '40s, he was recording in a smooth pop/R&B style derivative of Nat "King" Cole and Charles Brown. He got his first Top Ten R&B hit with "Baby, Let Me Hold Your Hand" in 1951. Charles' first recordings came in for their fair share of criticism, as they were much milder and less original than the classics that would follow, although they're actually fairly enjoyable, showing strong hints of the skills that were to flower in a few years.

In the early '50s, Charles' sound started to toughen as he toured with Lowell Fulson, went to New Orleans to work with Guitar Slim (playing piano on and arranging Slim's huge R&B hit, "The Things That I Used to Do"), and got a band together for R&B star Ruth Brown. It was at Atlantic Records that Ray Charles truly found his voice, consolidating the gains of recent years and then some with "I Got a Woman," a number-two R&B hit in 1955. This is the song most frequently singled out as his pivotal performance, on which Charles first truly let go with his unmistakable gospel-ish moan, backed by a tight, bouncy horn-driven arrangement.

Throughout the '50s, Charles ran off a series of R&B hits that, although they weren't called "soul" at the time, did a lot to pave the way for soul by presenting a form of R&B that was sophisticated without sacrificing any emotional grit. "This Little Girl of Mine," "Drown in My Own Tears," "Hallelujah I Love Her So," "Lonely Avenue," and "The Right Time" were all big hits. But Charles didn't really capture the pop audience until "What'd I Say," which caught the fervor of the church with its pleading vocals, as well as the spirit of rock & roll with its classic electric piano line. It was his first Top Ten pop hit, and one of his final Atlantic singles, as he left the label at the end of the '50s for ABC.

One of the chief attractions of the ABC deal for Charles was a much greater degree of artistic control of his recordings. He put it to good use on early-'60s hits like "Unchain My Heart" and "Hit the Road Jack," which solidified his pop stardom with only a modicum of polish attached to the R&B he had perfected at Atlantic. In 1962, he surprised the pop world by turning his attention to country & western music, topping the charts with the "I Can't Stop Loving You" single, and making a hugely popular album (in an era in which R&B/soul LPs rarely scored high on the charts) with Modern Sounds in Country and Western Music. Perhaps it shouldn't have been so surprising; Charles had always been eclectic, recording quite a bit of straight jazz at Atlantic, with noted jazz musicians like David "Fathead" Newman and Milt Jackson.

Charles remained extremely popular through the mid-'60s, scoring big hits like "Busted," "You Are My Sunshine," "Take These Chains From My Heart," and "Crying Time," although his momentum was slowed by a 1965 bust for heroin. This led to a year-long absence from performing, but he picked up where he left off with "Let's Go Get Stoned" in 1966. Yet by this time Charles was focusing increasingly less on rock and soul, in favor of pop tunes, often with string arrangements, that seemed aimed more at the easy listening audience than anyone else. Charles' influence on the rock mainstream was as apparent as ever; Joe Cocker and Steve Winwood in particular owe a great deal of their style to him, and echoes of his phrasing can be heard more subtly in the work of greats like Van Morrison.
One approaches sweeping criticism of Charles with hesitation; he was an American institution, after all, and his vocal powers barely diminished over his half-century career. The fact remains, though, that his work after the late '60s on record was very disappointing. Millions of listeners yearned for a return to the all-out soul of his 1955-1965 classics, but Charles had actually never been committed to soul above all else. Like Aretha Franklin and Elvis Presley, his focus was more upon all-around pop than many realize; his love of jazz, country, and pop standards was evident, even if his more earthy offerings were the ones that truly broke ground and will stand the test of time. He dented the charts (sometimes the country ones) occasionally, and commanded devoted international concert audiences whenever he felt like it. For good or ill, he ensured his imprint upon the American mass consciousness in the 1990s by singing several ads for Diet Pepsi. He also recorded three albums during the '90s for Warner Bros., but remained most popular as a concert draw. In 2002, he released Thanks for Bringing Love Around Again on his own Crossover imprint, and the following year began recording an album of duets featuring B.B. King, Willie Nelson, Michael McDonald, and James Taylor. After hip replacement surgery in 2003, he scheduled a tour for the following summer, but was forced to cancel an appearance in March 2004. Three months later, on June 10, 2004, Ray Charles succumbed to liver disease at his home in Beverly Hills, CA.