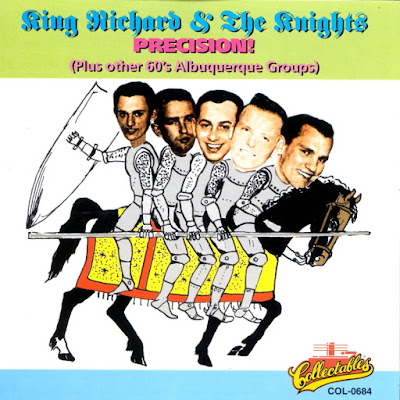 The Knights (a.k.a. King Richard and the Knights) had its beginnings in 1961 in Albuquerque, New Mexico (U.S.A.), during a time when instrumental rock ruled the world with The Ventures and The Fireballs leading the way. Thus, the band (or combo as it was called back then) became a Ventures/Fireballs-style band, playing 40 to 50 instrumental guitar songs per gig with no vocals other than a Chuck Berry tune here and there to break the monotony.

By 1964, the band finally developed an identity and released "Precision" on a little label called Red Feather Records. This guitar instrumental with a classical piano accompaniment performed by the studio engineer, Dave Bonham, became a regional hit (chiefly due to the unique combination of these two music genres) and set the record for the most time at number one for a local release on the then ruling Albuquerque, New Mexico rock-and-roll AM radio station, KQEO. But when the Beatles invaded the U.S. in Feb. of 1964, it was a bad omen for The Knights. As many other bands at the time followed Ken Fisher in his "Learn it, Do it, and Profit from it" mantra the Knights just couldn't give up their beloved rock instrumental efforts. After a few notable vocals on John Wagner Studios' Delta Records, the band disbanded in 1967.

King Richard (Dick Stewart), however, jumped on the psychedelic-rock bandwagon, not as a guitarist, but as a fanzine publisher (The Lance Newsletter), a record label owner (Lance Records), and a record distributor and promoter for other local labels. Although Stewart had a successful two-year-run with those companies that included a number of psychedelic and R&B 45- rpm releases by Albuque rque artists, who became well known in the Southwest U.S. during the mid-'60s, he, nevertheless, turned his back temporarily on rock and roll and directed his attention to another music genre: Mexican-American rancheras and tr aditional Latin music of Central and South America. Thus, Dick replaced Lance Records with another label (Casanova Rec ords), releasing an impressive number of vinyl albums and singles from 1968 to 1972. Many were hits in the Latin market throughout the U.S. and Mexico, including so me guitar instrumental efforts by Stewart himself, who was also a Casanova artist.

After two decades of performing with his two sons (Jason and Richard) in groups Dick named, Knee Deep, The Mountain Riff-Raff, and The Jyck Monkey Band (pronounced "jick"), the boys burned out on their dad's genre of music and moved to Austin, Texas in 1994 to further their own music careers. Shortly thereafter, Dick Stewart contacted one of the original bass players of the early Knights (Gary Snow) and asked him if he would be into taking a trip back to their '60s guitar instrumental roots. Gary jumped at the chance and beginning in late 1997, they both dedicated a year of intense on e-on-one practices relearning early '60s Ventures' and Fireballs' covers.

From 1998 to the present, Dick Stewart has written more than 40 instrumentals and created a number of guitar instrumental arrangements with covers of standout melodious songs of the late ‘50s and early ‘60s, many of which were originally released as vocals. At the close of 1998, Stewart and Snow scored big with a very talented Albuquerque drummer (Steve Hudgins) who owns a garage sound studio (literally). Although he was only two years old when The Knights originally formed, he picked up on the early '60s guitar instrumental style with ease and great interest. 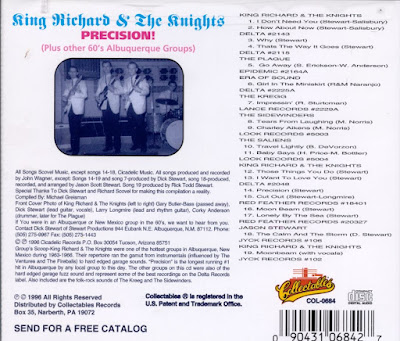