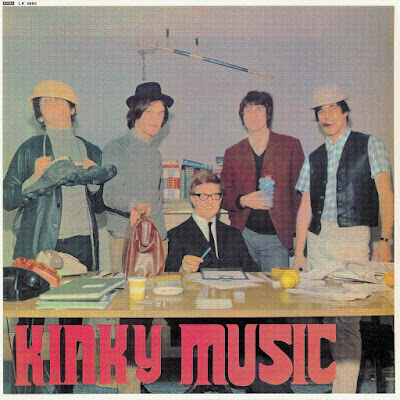 It's hard to imagine Kinks fans being at all interested in this album of orchestral MOR covers of Kinks tunes when it was issued in 1965. Such instrumental treatments of the catalog of leading British rock bands, however, were somewhat in vogue in the 1960s, with the Rolling Stones' manager lending his name to an album by the Andrew Loog Orchestra spotlighting Rolling Stones covers, and Beatles producer George Martin overseeing some similar recordings of the Lennon-McCartney catalog. Kinky Music -- which has no instrumental or vocal contributions by any of the Kinks or Larry Page, incidentally -- is a frivolous curiosity at its best, sometimes making over the Kinks' early material into unrecognizably bland easy listening arrangements.

There's a certain Swinging London background music verve to some of the stuff, though, aided by contributions from some of the day's leading session musicians, including guitarists Jimmy Page and Big Jim Sullivan, and bassist John Paul Jones. There are some pretty swinging go-go organ and horns on tunes like "Come On Now" and "Got My Feet on the Ground," for instance, while "Ev'rybody's Gonna Be Happy" has a brief, cooking guitar solo that most likely is the work of young Mr. Jimmy Page. This is really a novelty, though, of interest mostly to anal Kinks collectors and not even particularly good by the standards of '60s background go-go music. It does include one song, the Dave Davies composition "One Fine Day," that the Kinks never released, but if you want to hear that you should try and find the much superior rock version done in the mid-'60s by Shel Naylor. The 2000 CD reissue on RPM makes this rarity much easier to locate, and adds thorough historical liner notes. 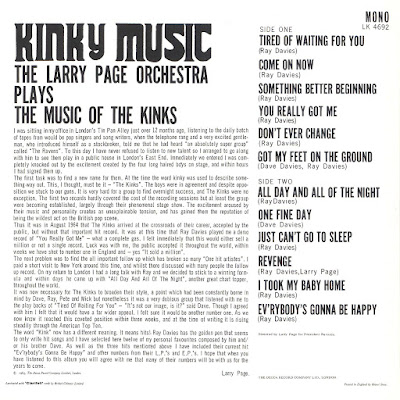