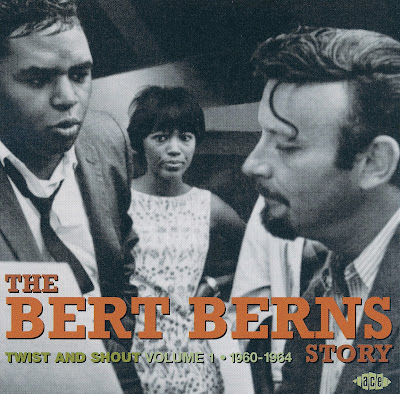 Like other compilations on the Ace label devoted to great Brill Building songwriter/producers (Jerry Leiber and Mike Stoller, Doc Pomus and Mort Shuman, Gerry Goffin and Carole King), this volume on Bert Berns is a welcome retrospective of an important figure. Like those other volumes, however, it should be cautioned that this might be more for serious fans/collectors than the general early pop/rock fan, since its mix of hits and rarities means the quality is more uneven than what one might expect from a best-of anthology, and not as comprehensive as one might expect from a box set. In this particular case, it seems that care has been taken not to offer more than one song from any particular artist, which means that quite a few noteworthy items are missing from the likes of the Drifters, Solomon Burke, Garnet Mimms, the Isley Brothers, and Ben E. King. So don't take the CD as a compilation of Berns' very best work -- a separate project that someone should really undertake, especially as a previous attempt (The Heart and Soul of Bert Berns) was woefully skimpy in that regard. Judging this disc for what it is rather than what it isn't, however, it does offer an interesting cross section of his early work, including the big hits "Twist and Shout" (the Isley Brothers), "A Little Bit of Soap" (the Jarmels), "Cry to Me" (Solomon Burke), and "Killer Joe" (the Rocky Fellers). There are also some good not-so-big singles from fine '60s recording stars Gene Pitney ("If I Didn't Have a Dime [To Play the Jukebox]"), Garnet Mimms ("Look Away"), and Little Esther Phillips ("Mo Jo Hannah"). And there are also some rare or at least uncommon originals of some very noteworthy songs made into bigger hits by others, including the Mustangs' "Baby Let Me Take You Home" (covered on the Animals' first single), Lulu's eerie and not wholly successful version of "Here Comes the Night" (covered by Them), and the Vibrations' "My Girl Sloopy" (redone as "Hang on Sloopy" by the McCoys). On the other hand, there is a bunch of rather generic pop/R&B/Latin combinations that stick with too many similar chord progressions, though it's interesting to hear a lick crop up in one of these, Marv Johnson's "Come on and Stop," that would be recycled to much better use in Them's "Here Comes the Night." When he was at his best, however, Berns could make that pop/R&B/Latin combo work as well as anyone, as the finest selections on this CD demonstrate. As is the custom for Ace, excellent liner notes detail both Berns' early career and these songs/recordings in particular.

1.6 I Should Have Listened - Little Jimmy Dee

1.9 Twist and Shout - the Isley Brothers