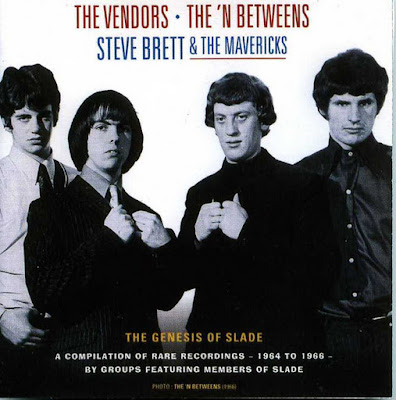 Richie Unterberger
The idea behind this compilation is one that's extremely useful to Slade fans trying to track down rarities recorded by groups in which the members played prior to Ambrose Slade's formation in the late '60s. This 24-track CD includes all of them, starting with the privately pressed 1964 EP by the Vendors (with Dave Hill on lead guitar and Don Powell on drums), and moving on to the three flop 1965 singles by Steve Brett & the Mavericks (with Noddy Holder on guitar and backing vocals). Most significantly, this has the two 1966 singles by the 'N Betweens that featured all four Slade members, as well as three 1966 outtakes by that lineup, and the rare EP and a four-song acetate recorded in 1965 by an earlier 'N Betweens lineup with Hill and Powell. Still, the overused cliché "of historical interest only" applies here, although some of the 'N Betweens tracks are fairly decent. The Vendors' EP is dominated by just-professional oldies covers, though it does have the generic Merseybeat-style original "Don't Leave Me Now," co-written by Hill. The Steve Brett & the Mavericks singles are pretty limp and corny mainstream pop/rockers heavily influenced by Elvis Presley ballads and sub-Elvis British crooners like Adam Faith, and it's hard to see how these could appeal to many if any Slade fans. The first lineup of the 'N Betweens boasted a far tougher R&B-rock British Invasion sound, but most of the tunes here are covers, and they're far below the standards of the Yardbirds, the Pretty Things, and the like, though generally that's the bag for which they're aiming. Best of all on the disc, though not great by any means, are the two 1966 singles by the 'N Betweens' second lineup, which are fair but not very imaginative period British soul-blues-rock. A little bit of the crude streak that would flower in Slade surfaces in the outtake "Ugly Girl," co-written by their (briefly) producer, Kim Fowley. Only seven of the tracks, incidentally, were taken from the master tapes; some surface noise is present on some of the cuts mastered from vinyl and acetates, though it doesn't seriously hinder the listenability.
The Vendors ‎– Don't Leave Me Now (EP 1964) 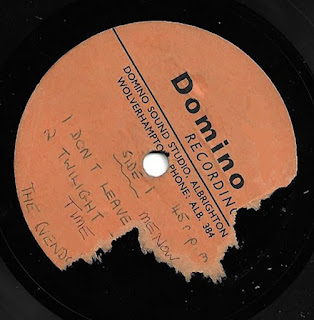 The disc is a privately made acetate disc, recorded and pressed at the Domino Recording Studio, Albrighton, near Wolverhampton in 1964. The label bears the recording studio name, as did other acetate discs pressed for other local groups at the time. The Vendors contained future Slade members Don Powell (drums) and Dave Hill (guitar). Of a dozen or so copies that were made, only two playable copies of the disc are known to still exist and one further broken example. The two surviving copies belong to band members.
The Genesis Of Slade: Rare Recordings From 1964-1966 (2000) 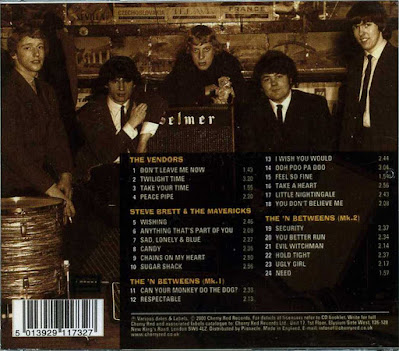 This is a re-release, it was originally released on TMC Records in 1996. Cherry Red made an error , missing out track 11 which should be Hurting Inside by Steve Brett & The Mavericks and therefore only 24 tracks grace the album and the track listing printed on the release is wrong...
But...You can find this track (Hurting Inside) in our archive ...
***