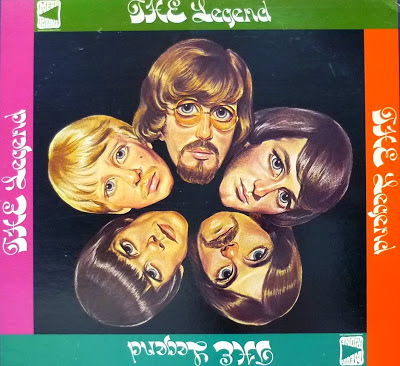 Formed in California in the late-'60s, this obscure band was signed for a one-off deal with the small Encino-based Megaphone label for whom they produced this eponymous album in 1968. Shortly after, The Legend disappeared without a trace, although according to some sources the band morphed into the equally obscure Dragonfly, also on Megaphone.
Serving up a mix of poppy psych originals and a handful of inspired covers (including The Who's "The Kids Are Alright", The Troggs' "With A Girl Like You" and Bob Dylan's "Baby Blue") this album is a rare slice of early, surprisingly radio-friendly, Southern Californian psychedelia.
Members:
- Jack Duncan (bass),
- Barry Davis (drums, backing vocals),
- Gerry Jimerfield (guitar, lead vocals),
- Randy Russ (guitar, backing vocals),
- Ernie McElwaine (keyboads)
1.) With a Girl Like You (Reg Presley) - 2:17
2.) The Sky That Is Blue (B. Corso) - 2:47
3.) Zepplin's Good Friday (E. Brooks - S. Romans) - 2:42
4.) Where Oh Where Is Mother (B. Corso) - 3:03
5.) Yesterday's Child (B. Corso) - 2:31
6.) Eyes of the World (D. McGinnis) - 2:27
7.) The Kids Are Allright (Pete Townshend) - 2:53
8.) Cold Wind In August (B. Page) - 2:32
9.) Sunny Day (E. Brooks - S. Romans) - 2:11
10.) You'll Be Sorry Someday (B. Corso) - 2:41
11.) Gigi (Lerner - Loewe) - 2:17
12.) Baby Blue (Bob Dylan) - 5:27
Very rare and clean 1968 first pressing by a formidable garage band that changed their name to DRAGONFLY a year later by kicking up the volume, oh, about by 50 times.... there's some of that DRAGONFLY influence of hard fuzz psych to be found on this platter:
Originally from Colorado, the five-piece LEGEND relocated to Los Angeles and a year later became the mighty Dragonfly, who also recorded for the same "Megaphone" label.
The material on this album largely predates the psychedelic era and is full of cover versions (The TROGGS "With A Girl Like You", Dylan's "Baby Blue" and The WHO's "The Kids Are Alright". A few cuts, like "Where Oh Where Is Mother" contain some good guitar playing with psychedelic undertones and the album ends with a little sitar solo.   Offering up a mixture of band originals and popular covers (Bob Dylan, The Troggs, The Who), musically the LP has more than its share of charms. Tracks such as 'The Sky That Is Blue', 'Zepplin's Good Friday' and 'Yesterday's Child' showcases a tasty blend of tight, Bealtesque harmonies and catchy melodies. Legend occasionally drifts close to The Left Banke ('Sunny Day' and 'Gigi'). Even more impressive is their harder rock sound, including the fuzz guitar and feedback propelled 'Where Oh Where Is Mother' and their awesome fuzz & sitar powered take on Dylan's 'Baby Blue' (with sitar fadeout). The album vanished without a trace, followed in short order by the legendary DRAGONFLY Lp.
Their take on The Troggs hit 'With a Girl Like You' is in the same vein as the original vut comes off interesting as the lead singer seemes to have a strange accent. Great tune, with a touch of Mersybeat harmonies and there is even plenty of cowbell   'The Sky That Is Blue' is a breezy, mid-tempo pop-rock song that features some nice vox organ and wonderful group harmony vocals.   Kicked along by some wonderfully cheesy organ, 'The Sky That Is Blue' has one of those classic mid-1960s vibes - imagine something that tried to cross The Young Rascals and The Beatles. Highly infectious with some nice fuzz guitar in the background.   The album's first all-out rocker and one of the album's psych-tinged numbers, 'Where Oh Where Is Mother' is built on an intriguing mixture of fuzz guitar, electric harpsichord, weird studio sound effects, and another display of the band's impeccable harmony vocals. This was another one where the lead singer (Corso?) seemed to display a noticeable accent.
Pulling a page out of The Beatles songbook, 'Yesterday's Child' is seemingly a stab a writing a socially relevant ballad -- Pretty, but it isn't 'Eleanor Rigby'.   Even though heavily arranged, 'Eyes of the World' is actually one of the album's most interesting performances with some wild lead guitar and an energetic lead vocals.
While up theere with the WHO's version, their vox-powered cover of The Who's 'The Kids Are Allright' is actually quite good with some chugging drums and a nice, fuzz-drenched lead guitar. The track was issued as a single.
One of the album's most pop-oriented efforts, 'Cold Wind In August' has a decent commercial tinge with backing harmony vocals that are nice 'Sunny Day' has a pleasant sunshine-pop feel to it with backing vocals that would have made John Phillips day.
With the band playing at hyper-speed (sounds like they'd ingested meth amphetamines during the recording sessions ...), 'You'll Be Sorry Someday' is simply hysterical. Nice fuzz solo at the tail end of the track.
Filled with lovely harpsichord, this one grabs attention from the opening chords. The fact that ballad 'Gigi' sounded like a Left Banke outtake does't hurt either.
So if you're going to do a Dylan cover why not toughen it up and give it a fuzz-driven garage edge? To their credit that's exactly what these guys did on their version of 'Baby Blue'. Along with the totally bizarro sitar closing, the result is one of the album's best tracks and one of the best Dylan you'll ever hear.   With a Girl Like You The Sky That Is Blue Zepelin's Good Friday Where oh Where Is My Mother Yesterdays Child Eyes of the World II The Kids Are Allright Cold Wind in August Sunny Day You'll Be Sorry Some Day Gigi Baby Blue
http://badcatrecords.com/BadCat/LEGEND.htm
http://www.geocities.ws/rdten3/HORSLIPS.htm
http://rateyourmusic.com/collection/RDTEN1/reviews,ss.t/22
***