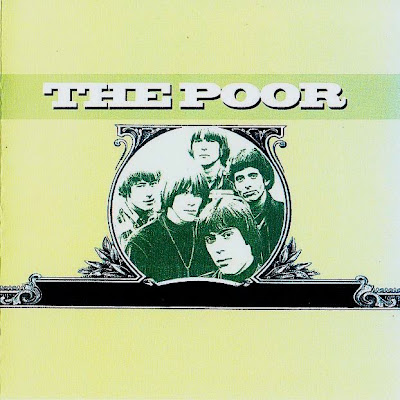 The Poor are one of those bands that keeps coming up in passing mentions in the back channels of 1960s Los Angeles rock history, though relatively few people have heard their records. They're probably best known for the bigger bands that several members went on to after the Poor broke up, with Randy Meisner joining Poco and then the Eagles, and Allen Kemp and Pat Shanahan turning up in New Riders of the Purple Sage. In their brief time together, the Poor recorded four 1966-68 singles, none of them too exceptional or original, but all of them fairly typical Los Angeles harmony-oriented pop-rock with strong folk-rock and sunshine pop flavors.

The Poor formed from the ashes of the Soul Survivors (no relation to the more famous Philadelphia band of "Expressway to Your Heart" fame), a Colorado group who'd cut a couple of fair garage-pop singles in 1965 and 1966. Kemp and Shanahan had been in the Soul Survivors, and teamed up with Randy Meisner and Randy Naylor in Los Angeles to form the Poor. They had some big-name connections -- they were managed by Charlie Greene and Brian Stone, who also handled Sonny & Cher and the Buffalo Springfield; their first three singles were produced by Barry Friedman, who also worked with the Springfield, Kaleidoscope, Paul Butterfield, and others around that time; and while most of their singles had original material, they also covered early tunes by Tom Shipley and Michael Brewer, of Brewer & Shipley.

But none of their singles saw much action, with only Shipley's "She's Got the Time (She's Got the Changes)" (also done by Brewer & Shipley) making the charts, and then only bubbling under at #133 at that. After the Poor split, Meisner, Kemp, and Shanahan all put in time with Rick Nelson's backing group, the Stone Canyon Band, before landing in their most famous bands. All of the Poor's singles were compiled on the 2003 CD compilation The Poor, which also has the two Soul Survivors singles. 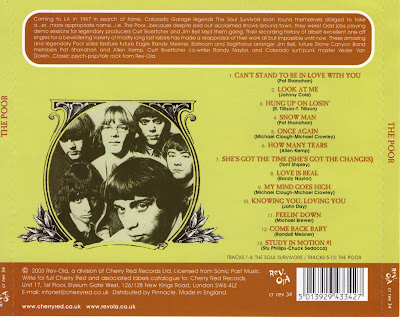 Although the Poor have been portrayed as a great lost band from the 1960s, the evidence on this short collection, which brings together the four singles they recorded between 1966 and 1968, as well as two singles released by the Soul Survivors, a nascent version of the band, between 1965 and 1966, suggests that the talent certainly was there, but unfortunately not the material. Randy Meisner (who went on to play a key role in both Poco and the Eagles), Pat Shanahan, and Allen Kemp (who both ended up in New Riders of the Purple Sage) were all members of the Poor, and the tracks here show definite potential, with beautiful, high harmonies that fall somewhere between the folk-rock feel of the Beau Brummels and the sunshine pop of the Association. All that was really missing in the mix were some quality songs, and it's telling that a pair of Shanahan compositions, "I Can't Stand to Be in Love with You" and the delicate "Snow Man," both recorded before the Poor existed, are two of the more memorable moments here. Kemp's "How Many Tears," which sounds like a watered-down version of the Byrds (circa Gene Clark), also has its moments, as does the mildly psychedelic "My Mind Goes High" and the ornate, orchestrated "Study in Motion No. 1" (drawn from the soundtrack for Hell's Angels on Wheels) that closes the disc. But nothing really lingers in the mind after this album ends, and while the potential of this band is clear, they ultimately didn't even come close to realizing it. By all accounts the Poor were an amazing live band, but their recorded output reveals a gifted but fairly generic group without a strong personal identity. Fans of late-'60s sunshine pop and the first stirrings of what would later become L.A.'s version of country-rock may well enjoy this set for its historical and archival value, however.