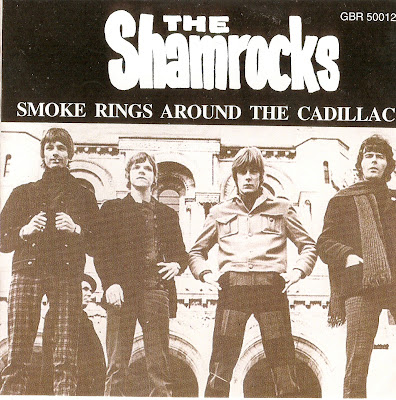 The Shamrocks were the most succesfull Swedish beat group in Europe during the 60's. They never made it into the Swedish charts, but they were popular in Germany, France, Netherlands and Japan. It all started in 1962 when the Shamrocks were founded. 1963 was the year of beeing part in several talent competitions. The result were a few bookings and the first recording for EMI - "Jag Har Bott Vid En Landsvag/Petite Fleur". In 1964 a new lineup (still with founding members Bjorn and Ian) won a competition: they were elected "The Beatles of Stockholm" and got a recording contract with "Karussell Records". They recorded "We Gonna Make It" and "A Lonely Man", both songs written by themselves.
In 1965 they became famous with the Renegades song "Cadillac". The song failed the Swedish charts but made it all over Europe. The band went on tour in Finland, Sweden and in 44 towns in Germany. In 1966, the band toured again on the continent and played 14 days in "Star Club Hamburg". In July, the band recorded in Hamburg, in three days, their first LP - "Smokerings". A lot of TV shows and gigs in France, Netherlands, Finland, Sweden and Germany were done in 1967.
To enter the UK market, a few songs were recorded in London and published later in '67 on the LP "Shamrock A Paris". Somewhere in the summer of the same year, founding member Jan Granaht (guitar) quit the band. The remaining band members decided to go on as a trio. Germany, France and Denmark saw the new Shamrocks shows with a lot of visual effects (fireworks, smoke-screens, bengal fires etc.).
In 1968, Kent Risberg (guitar) left the band to settle in Bonn, where the band spent a lot of time between their touring on the continent. Two weeks later, Shamrocks were back on the road again in Germany and France with Jonny Wallin on guitar. Then the band return home to Sweden and after a long due rest , Bjorn and Dieter (founding members) decided to make one last "thanks and farewell" tour in Germany. During this tour, Bertil Petterson was playing guitar. The story of the Shamrocks ended at the end of the 60's when the great beat era came to an end. 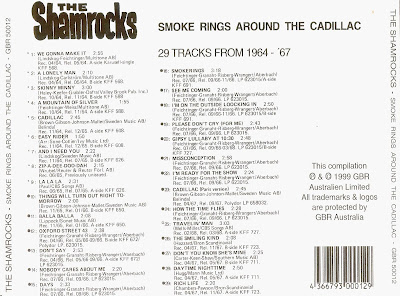