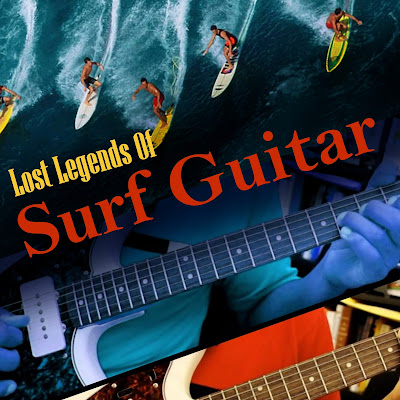 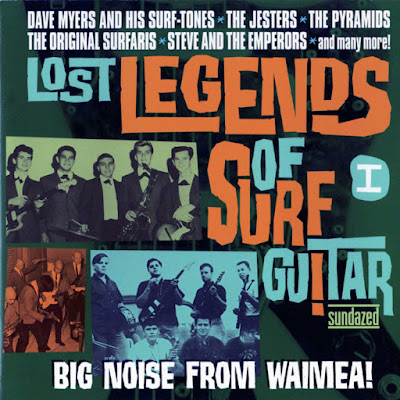 This collection of 20 surf instrumentals, all recorded in 1963 and 1964, is very much what you might expect of an anthology of lesser-known surf music on a quality reissue label such as Sundazed. That is, it's good, though not nearly as good as the very best '60s instrumental surf music anthologies, and can be confidently recommended to surf collectors. That's not only because it's rare (mostly originally done for very small labels) and pretty good, but also because even the biggest surf collectors won't have all of this, as eight of the tracks were previously unissued. There aren't many names among the artists that will strike chords of recognition, though the Pyramids of "Penetration" fame are here (with their Gary Usher-arranged 1963 cuts "Pressure" and "Contact"); Jim Messina was part of the Jesters, whose previously unissued recording of "The Jester" was produced and co-written by the then-teenaged prodigy; and the Original Surfaris (not to be confused with the Surfaris of "Wipe Out" fame), the Centurions, and Dave Myers all have their devotees among surf fanatics. There aren't many truly killer cuts, though the finest trademarks of surf music -- the monstrously reverbed guitar, the Latin and Middle Eastern-inflected melodies, the sleek tempos -- are in force more or less throughout. But there are some numbers that would stand comfortably on any cream-of-the-'60s surf collection, like the Chandelles' "El Gato" (produced in New Mexico by ex-Buddy Holly producer Norman Petty) and Dave Myers' "Gear," with the almost military crunch of its rhythms. 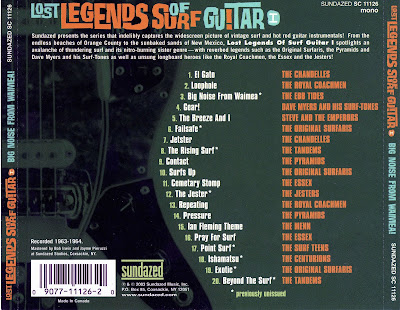 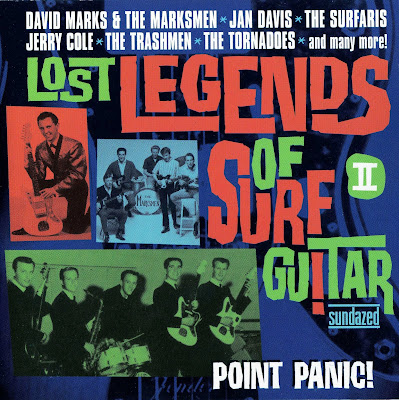 Like its predecessor in the Lost Legends of Surf Guitar series, this serves up an assortment of instrumental surf rarities from the early '60s, all of the 20 tracks on this compilation recorded between 1962 and 1964. It's a little less impressive than the first volume, not for reasons that are too obvious, but just due to a general lower level of energy, imagination, and devastating riffs. For surf enthusiasts, however, it's not bad at all, and there are a good deal of names here that made their mark on rock history, even if the Trashmen and the Surfaris are the only ones who had surf music hits. David Marks & the Marksmen, for instance, led by just-ex-Beach Boy Marks, are represented by a couple of previously unissued 1963 recordings; Scott Engel, who did the 1963 single "Devil Surfer," would later become Scott Walker, as part of the Walker Brothers and then a solo star; Michael Lloyd was in the New Dimensions; Terry Melcher produced the Catalinas' "Banzai Washout"; and Jerry Cole was a prolific Los Angeles session man. There are also a couple of previously unreleased 1963 Surfaris cuts, though these are unremarkable covers of Link Wray's "Jack the Ripper" and Duane Eddy's "Yep." As is the custom on these anthologies, some tracks make bigger ripples than others, with some really tough and fast playing on Cole's "Point Panic" and Gene "The Draggin' King" Moles' "Burning Rubber." In contrast, Jan Davis' "Boss Machine" effectively slows the pace down to a cooler, moodier vibe, and Engel/Walker's "Devil Surfer"'s strings and wordless corny pop backup vocals are odd rejoinders to the manic laughs (of the devil, one supposes) that supply the tune's main gimmick. 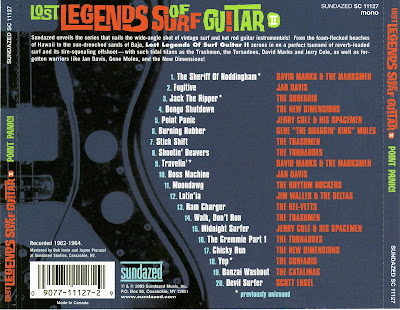 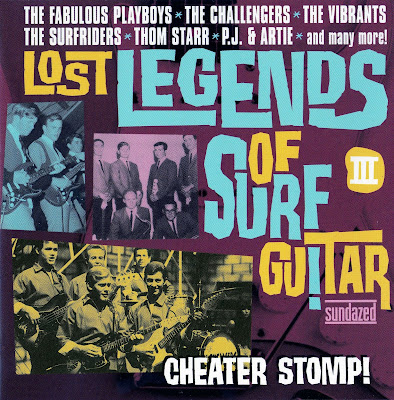 Lost Legends of Surf Guitar, Vol. 3 is narrower in focus than the previous two volumes of the series, being devoted to 1962-1964 tracks produced by Richard Delvy (who played in a couple surf bands, the Challengers and the Bel-Airs, himself). It also acts as a document of much of the surf music being made in the early '60s on the Palos Verdes Peninsula and South Bay south of Los Angeles. As a possible consequence, however, the music isn't quite as interesting or varied as it is on the first two Lost Legends of Surf Guitar volumes. Too, it's entirely lacking in big names, even big names just passing through on their way to bigger non-surf things; the Challengers are the best-known band on this 20-track comp, and they're not exactly too famous, particularly outside surf specialist circles. So for surf specialists only this might be, although the music's certainly respectable, if not in the upper echelon of '60s surf anthologies. There's a lot of twang, reverb, and raunchy sax here; it's just that the melodies are often on the generic side. On hand are three previously unissued tracks by Thom Starr & the Galaxies (their "Heatwave" is actually an appropriately titled scorcher, and no relation to the Motown classic of the same name), with most of the rest having appeared only on 45s on very small labels or obscure LPs and compilations. 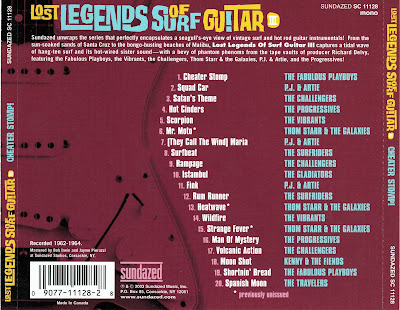 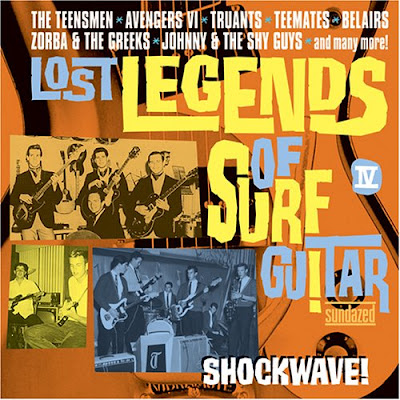 Much like '60s garage rock, there seems to be an inexhaustible supply of great surf instrumental sides from the classic era still waiting to be rediscovered, and the fourth volume in Sundazed's superb Lost Legends of Surf Guitar series features 20 great sides that have somehow avoided being anthologized to death (in fact, three cuts on this compilation have never been released before). Opening up with the amazing reverb abuse of Zorba & the Greeks' "Shockwave" (and no, that's not a joke -- just check out that glorious noise), this compilation offers up some lovely examples of surf guitar in the classic style (check out the moody "The Truant" by the Truants, "Volcanic Action" from the Bel-Airs, and the reverb-drenched "The Hearse" from Al Casey), as well as a few entertaining oddities (the amusingly ominous "Fall Out" from the Stage-Men, the glorious Ventures rip of Jan Davis' "Verti-Go-Go," and a hard-stompin' cover of "Walk Don't Run '64" by the Teemates). As you'd expect from Sundazed, the track selection is choice, the audio is excellent, and the liner notes from surf archivist John Blair are entertaining and fact-filled. Lost Legends of Surf Guitar: Shockwave is a real treat for non-hodads everywhere -- grab your board and toss this disc in the player while the waves are up! 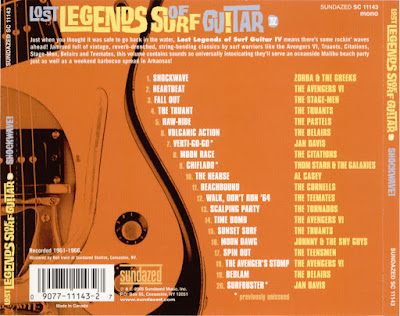 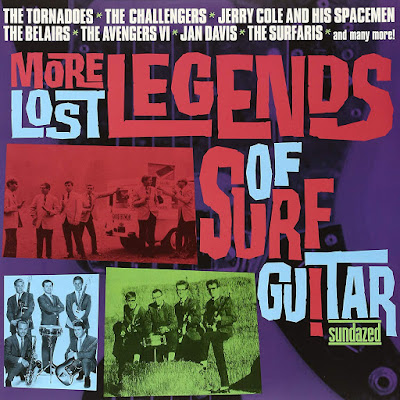 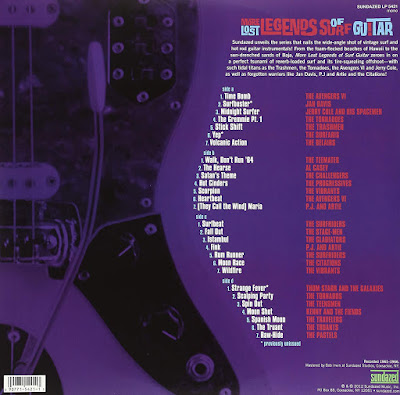