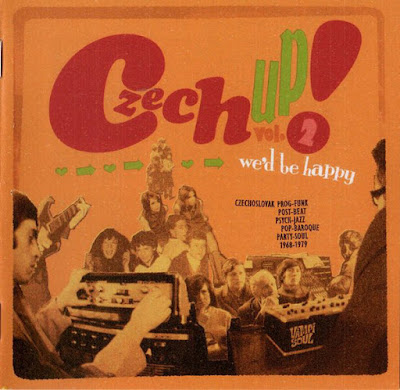 This second volume of soul, funk, beat and psych from Czechoslovakia is bursting with more phenomenal tracks form behind the Iron Curtain that were originally released on the incredible Supraphon and Panton labels between 1968-1979.
Straightaway we get Olympic’s snappy, organ-driven stomper ‘Bláznivej Kiki’ (Supraphon, 1971), complete with some delicious guitar soloing! The horns are blazing to the forefront on Hana Ulrychová’s soulful shouter ‘A Co Má Bejt’ (Supraphon, 1971), full of fuzz guitars and frantic drumming! Fans of funky jazz will dig Mahagon’s booty-shaking ‘Prameny Poznání’, although its 1980 release (on Supraphon) technically falls outside the compiler’s remit. And Czech soul doesn’t get much better than Michal Prokop & Framus Five’s spot on (English) cover of the great Sam & Dave floor filler, ‘Hold On, I’m Coming’ (Supraphon, 1969).
The compilation’s title track comes from the Hollies-styled harmony pop group Beatings’ 1970 EP “Edice Mikrofóra”, while the late heart throb Valerie Čižmárová (1945-2004) raises goose pimples with her sweet and soulful ‘Byls Má Bój’, which could have worked perfectly as a James Bond theme song! The Blue Effect return from Vol. 1 with another proggy psych track from their Panton 1969 EP “Edice Mikrofóra”, ‘Snakes’ features more wah-wah guitar and Eastern melodies, although the operatic vocals may be an acquired taste! SHQ deliver another amazing jazzy soul strutter courtesy the snazzy organ-driven ‘V Oboře’ which also delivers a dreamy alto/tenor sax interplay. Sadly, many of the members have passed on, but the parent album Jazzové nebajiky (Panton, 1972) has been revived from original master tracks and is worth checking out (Happy Trails, 2016)!
Czechoslovakia’s longest-lasting group Synkopy 61 have actually been around since 1960 (and with almost the entire original lineup!) and ‘Bytost Podivná’ is a fine example of hard rock with prog overtones, including tribal drumming, fuzz guitars, strident harmonic choruses and several aboutface time changes! Fans of Deep Purple and Uriah Heep will love this one! In the mood for some Czech Dead-styled jamming with jazzy, Latin overtones? Then groove to the edit from the 16-minute ‘The Wizard’ from Jazz Q’s 1974 Symbiosis album and then hunt down a copy to experience the full effect. The 6 ½-minute excerpt included here is amazing!
The multinational Vulkán featured the Greek Elefteriadu sisters, Martha and Tena, who pull out all the stops on the soul shouter ‘It’s Always Ever The Same’ with admittedly awkward English lyrics from an English music student studying in Brno at the time, Ian Lowes. Petr Novák was one of Czechoslovakia’s premiere heart throb, and his curiously-named backing band George & Beatovens [sic!] recorded numerous albums for Panton between 1969-71. ‘Zahrada za domem’ from Modlitba za Iásku (1971) is an eerie haunted house thriller with Sabbathian overtones. Flamengo’s funky ‘Zavrazdil Jsem Láaku’ (Supraphon, 1968) features both haunting vocals and tasty guitar licks. And if a Czech Janis Joplin is to your liking, then you’ll drop down on your knees and salute Eva Pilarová’s Czech-language version of ‘Piece of My Heart’, ‘Padni Na Kolena’ (Supraphon, 1970), which is quite spot-on if I say so myself!
More sultry females are in store with the Queen of Czech soul (alternately known as “lady soul” and “lady prog-funk”) Marie Rottrová, who pours her out all over ‘Tvůj Pŕítel Vítr’ (Supraphon, 1975), which again features some nifty guitar work and strident brass backing from the aforementioned Flamengo. The Soulmen won several awards as “Best Group of the 1st Czachoslovak Beat Festival” with their freakbeaty “Best Original Song” ‘I Wish I Were’ (Panton, 1968), but sadly disbanded soon after due to internal strife. Barnodaj is an enigma on this compilation, with their Maugli concept album (Supraphon, 1978) based on Kipling’s Jungle Book and opening with ‘Dzungle’, a late-period sitar-drenched headswirler! Finally, Czech pop sensation Hana Zagorová may be another oddity for this type of compilation, but her baroque pop B-side ‘Rokle’ (Supraphon, 1969) is a very worthy candidate for those female-centric compilations that feature hidden 60’s gems and makes a fine end to our musical journey through Czech prog, psych, beat, funk, and soul. 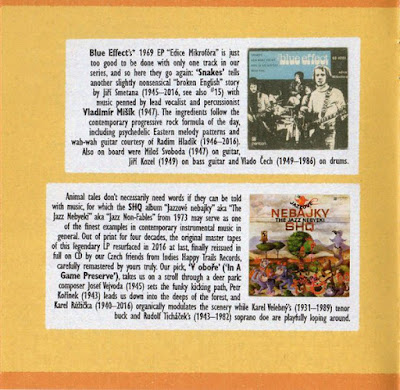 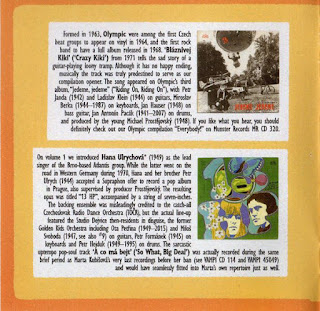 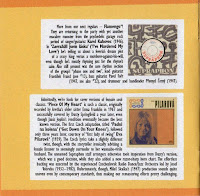 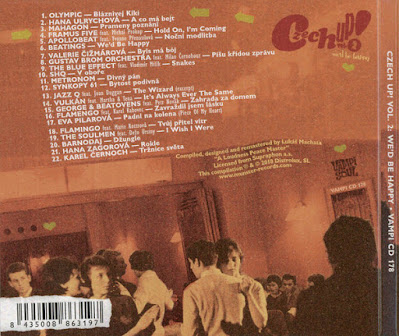