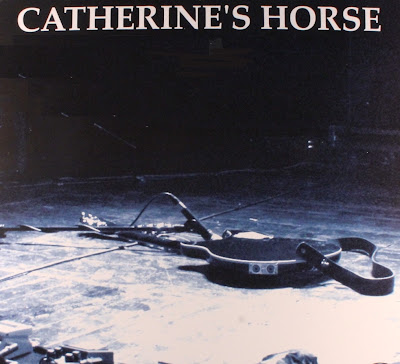 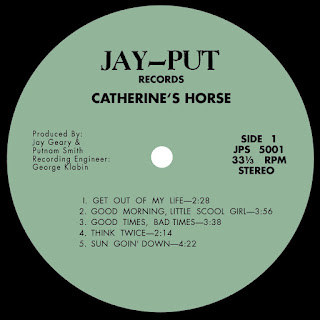 Original
Jay-Put ‎– JPS-5001/2
Vinyl, LP
US 1969
***
CATHERINE'S HORSE (Taft School, Watertown, CT)
Due to a long time growing interest into local 60s rock, most band stories, even of those who did put out rare and local records, have since been written. Not so with Connecticut band Catherine's Horse. Their sole album dates from 1969 and was released only in an inner sleeve and no cover. Due to its rarity it is still a largely unknown release among today's record collectors and honoured with five stars in Hans Pokora's "1001 Record Collectors Dream Book". But those who happen to be familiar with it, appreciate it for the fresh sound of the music and the clear production. That and the fact, that it's an amazing white blues rock album with a strong garage attitude provided by five high school students who never played professionally. The tracks are nearly all cover versions of classic, often moody blues tracks reminiscent of early Paul Butterfield Blues Band or Blues Project. The LP incl. long time standards such as "Good Morning Little School Girl", "Think Twice", "One More Mile" or "Can't Keep From Cryin" mixed with covers of Jimmy Brenstons' "Rocket 88" or Jagger / Richards "Good Times, Bad Times". The only group original ''Sun Going Down'' hints at the talent and potential the band had and rounds off the groups effortless white electric bluesrock expertise. This Reissue comes with the originally intended coloured cover-art. The detailed insert has the band's history as related by original members Roger Goodspeed, Jay Geary and Putnam Smith, alongside rare photos and memorabilia. A 100% legit release and a must for late 60s rock collectors. ~ artmaniac53
A1  Get Out Of My Life 2:28
A2 Good Morning Little Schoolgirl 3:56
A3 Good Times Bad Times 3:38
A4 Think Twice 2:14
A5 Sun Goin' Down 4:22
B1 Rocket 88 1:47
B2 Can't Keep From Cryin'  5:00
B3 One More Mile  5:10
B4 Mind To Give Up Livin' 4:44
Obscure, sleeve-less late 60s garage-bluesrock LP a la American Blues Exchange; may not appeal to everyone but I find it rather charming. No macho vocals or Clapton guitar showoffs, just local teens finding comfort in the nocturnal honkie blooz as represented by the Blues Project and Paul Butterfield, both of which are covered along with an unexpected "Rocket 88". Also one of the few LPs I know of with a clear influence from the first Grateful Dead LP, especially the Dead-derived take on "Good morning little schoolgirl". The downer tracks work the best; somehow these guys win me over. Not recommended for fans of the Ten Years After-type guitar-hero "blues". The LP was recorded as a school project (a study of the blues) in New York City during Spring Break 1969, and all band members were Taft students. "Sun goin' down" is a band original.
The LP (Jay-Put 5001) was recorded as a school project (a study of the blues) in New York City during Spring Break 1969, and all band members were Taft students. "Sun goin' down" is a band original.
These guys don’t play bad. There certainly isn’t a huge amount of guitar heroics that was the norm for blues bands of the era, but it does have some charm. I don’t know these guys at all. I just own the music and wanted to pass it on. If you like this era of music (and I certainly do) then you too maybe seduced by the unpretentiousness of this little disc.~ radiovickers
Source of old site " Psych It"
Posted by: D&J на 13:33