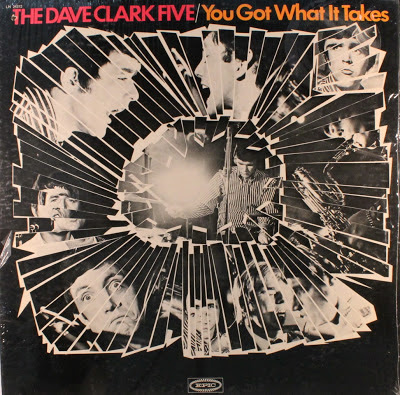 Leading off with their last big U.S. hit, "You've Got What It Takes" (a cover of an early-'60s soul hit by Marv Johnson), this 1967 LP might not have been a particularly strong album; you wouldn't say that, in fact, about any individual Dave Clark Five album, as good as their hits were. But it did mark an improvement over their previous album, Five by Five, and was less formulaic, if hardly bold or startling. It was something of an indictment of the group's failure to advance much creatively that one of the best tracks, the jittery good-time rocker "Thinking of You Baby," had actually been a moderate U.K. hit in 1964, though somehow it had eluded U.S. release until it found its way onto this long-player three years later. "Lovin' So Good" has something of the British Invasion catchiness that came more effortlessly to the band when they made their first US splash, with a bit more West Coast pop influence in the vocal harmonies. "Doctor Rhythm," the B-side of "You've Got What It Takes," is the toughest original, with a pile-driving riff and cocky Mike Smith vocal that makes up for the relatively slight song at the core. Elsewhere the songs are on the yet slighter side before a couple departures from the usual approach close the album: a brassy cover of "Blueberry Hill" where Smith's quite passionate singing outclasses the slow arrangement, and "Tabatha Twichit," which plugs into the passing fancy for nursery rhyme-type numbers in the 1967 British pop scene.
LP Album Epic LN 24312
1. You Got What It Takes
2. I've Got To Have A Reason
3. You Don't Play Me Around
4. Thinking Of You, Baby
5. Lovin' So Good
6. Doctor Rhythm
7. Play With Me
8. Let Me Be
9. Blueberry Hill
10. Tabatha Twitchit
Posted by: D&J на 01:07