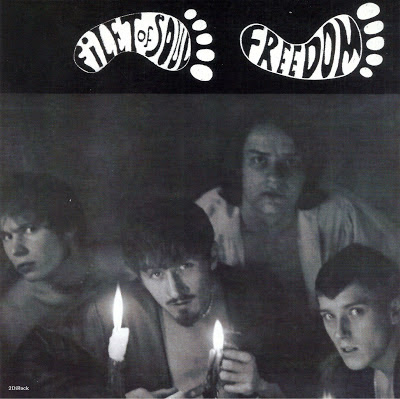 Band:
Mike Peace - vocals, guitar
Ben Wiesneiwski - guitar
Denny Lewan - bass
Rich Legault - drums
http://en.wikipedia.org/wiki/Filet_of_Soul_(Wisconsin_band)
http://www.michael-peace.com/MichaelPeace-AttilaHuns-FiletofSoul.htm
https://www.facebook.com/pages/Attila-the-HUNS/289503647737502?v=info
Весьма редкий единственный опус от Чикагской группы Filet Of Soul, выпущенный мизерным тиражом!!! Смесь Чикагского блюза с Psychedelic Rock, преобладающим в конце 60-х, довольно жесткого гаражного саунда в некоторых композициях, плюс битловские нотки.
Drummer Rich Legault, bassist Denny Lewan, singer/guitarist Mike Peace and rhythm guitarist Ben Wiesneiwski were all members of the Wisconsin-based Attila and the Huns. Formed in 1964, the band became quite popular on the local dance and club circuit, eventually releasing a self-financed 45 "CHERYL" and "THE LONELY HUNS" on the Sara label. In 1967 the band placed second in a local battle of the bands contest and caught the attention of businessman/manager/producer Lennie LaCour.
Singer/guitarist Mike Peace picks up the narrative: "Lennie was a gimmick kind of guy, who had his success in show biz due to an Orange Crush commercial that he sang vocals on as an artist know as the "Big Rocker". He was always trying to catch a trend or some bandwagon to ride along with it. The Hula Hoop was enjoying a big come back around 1968 so... the first release he did with us while were were still working as Attila and the Huns was a song called 'Hula Shake' which he wrote about a "new dance sensation that was sweeping the nation called the Hula Shake". It was such a contrived concept that it didn't stand a chance in the marketplace. I wrote the flip side 'Hurry Back', but Lennie didn't give me any writer credit for it. The 45 only shows his name as writer. This was by far the better of the two songs but it wasn't the push side of the record.
LaCour managed to get Chess Records interested in Attila and the Huns. Under his tutelage the company financed some recording sessions in the Chess Studio and even prepared cover art for a projected album, but nothing came of the deal.
Chess wouldn't release the album so Lennie had to buy the license rights to his own production. This was the original cover that was designed for Chess, but since they did not want to release it at the time, Lennie bought the license rights from Chess. The cost of a color cover was above his budget and he convinced us to change our names to "The Filet of Soul" so the cover was made black and white and the new name tacked on top of the old picture. This photo won a photographers blue ribbon at the Indian Head Photographers Convention around 1971. I set up a camera and shot the photo on an auto time shutter release setting.
Released by LaCour's Dynamic Records label 1969's blue-eyed soul single "Sweet Lovin'' b/w "Do Your Own Thing" (Dynamic catalog number 1002) was Lennie's next release for us and served as our debut under the new name 'Filet of Soul' - also Lennie's idea. This one was an immediate local Wisconsin hit. I remember driving to a gig and hearing "Sweet Lovin'' playing on my car radio. I had my radio buttons tuned for three local stations that I knew had our record. I was driving alone and out of curiosity I switched to WSTP Stevenspoint to discover they were playing it at the same time. WMRL Merril was the other station so I pushed that button to find it was also playing the song. I was bouncing up and down on my car seat and was so excited that I had to pull off the road, honk my horn and scream at the top of my lungs. I was sure that we would be appearing on the Ed Sullivan show next but it turned out that Lennie hadn't bothered to secure any kind of record distribution deals so record sales simply didn't happen. Turns out that Lennie believed that if a song was "hot" enough the distributors would contact him. But bigger stations were extremely reluctant to play records that didn't have distribution agreements since sales were what showed a song was hot. He had good intentions but not enough marketing savvy to help The Filet of Soul make it.
While the single did outside of the local area, LaCour signed the band to his own Magic Touch label, financing another release - 1969's 'Proud Mary' b/w (Get Out, Get Out) We Want Peace' (Magic Touch catalog number 2078). Like the debut their sophomore release did nothing commercially, but LaCour continued to support the band, financing an album on his small Chicago-based Moniquid Records.
Filet Of Soul - Freedom (1969/2011)
http://rutracker.org/forum/viewtopic.php?t=3994432 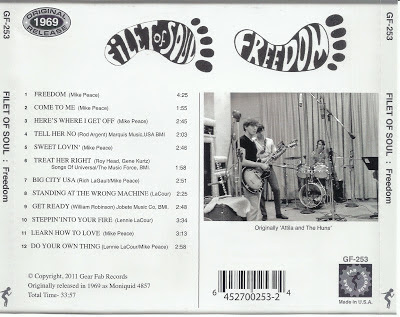 ***
"... Filet Of Soul very quickly developed their own sort of orientation with self-penned songs from a simple love ballad typed garage and 60s style with a good feeling for rhythm, also with the guitars to a whole diversity of common styles of the 60s with influences ranging from the twist era over The Beatles and even James Brown in two songs, all with something of their roots of inspirations coming through intact. Their roots, love songs and light but slightly raw groove makes their sound attractive and accessible. We hear all what is needed to make them a very enjoyable band....
...Filet of Soul - Freedom CD. Reissue of very rare 1969 low-fi private press rock record from the Chicago area ex-Attila and the Huns group. Released by the band themselves after beging rejected by Chess records....
...The great Chicago blues/psychedelic band that mixed Chicago blues with the prevalent Psychedelic sounds of the late 60's on the rare and classic 1969 LP Freedom. Produced by Lenny LaCour, Co-owner of Chess Studios, this reissue brings forth the great talent of Mike Peace, formerly of The Huns. From the master tapes... "