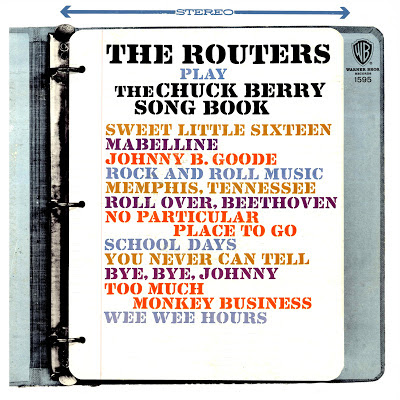 Although the Routers started off as a real band, by the time the quintet had garnered their solitary charting single, "Let's Go!" in 1963, Warner Brothers staff producer Joe Saraceno had replaced them with various and sundry members of the all-star recording studio heavyweights known as the Wrecking Crew. This A list included the respective talents of Hal Blaine (drums), Leon Russell (keyboards), Tommy Tedesco (guitar), and Carol Kaye (bass). Most notably featured was Plas Johnson (sax), whose yakety brass was often at the musical center of the material . The fairly self-explanatory Play the Chuck Berry Song Book (1965) was the combo's final long-player for the label. This was not because of sales, but rather a conflict of interest with rival Liberty Records -- who Saraceno was contractually obligated to -- and their own highly successful instrumental band, the Ventures. The early '60s were not necessarily the best of times for Chuck Berry -- who had spent five years (1959-1964) incarcerated for violation of the Mann Act. However, his musical legacy remained vibrant through the constant reworkings of his classic back catalog. This title features a dozen instrumental interpretations of Berry's seminal sides and rambunctious rockers. Both genre-defining platters such as "Rock and Roll Music," "Sweet Little Sixteen," and "Johnny B. Goode" as well as the lesser-known "Wee Wee Hours" are given strong workouts. The concurrently modern surf rock style drives the bluesy "School Days" and the chooglin' rhythm of "Maybelline" and "No Particular Place to Go." While obviously no substitute for the originals, the Routers deftly reinvent these Berry standards with their own propulsive flair and compulsive beat. Indeed, mid-'60s dance-crazed teens could easily do the Mashed Potato, Frug, and Pony to these seminal rockin' rhythms. In 2003, Collectors' Choice Music reissued Play the Chuck Berry Song Book as the final installment in their CD restoration of the Routers' Warner Brothers catalog. Let's dance on! 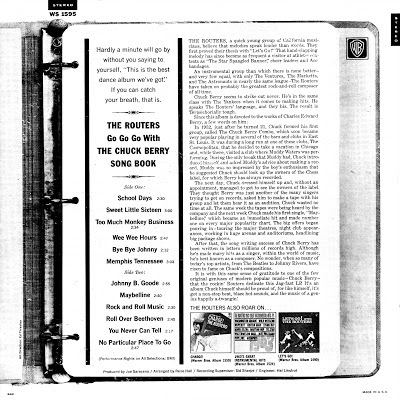