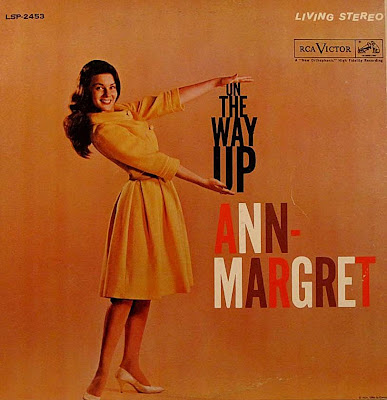 Ann-Margret's RCA Victor debut album, And Here She Is..., didn't get much attention in 1961, but she did better with her bluesy single "I Just Don't Understand," which peaked in the Top 20 in September. That set up this, her second solo LP, which featured "I Just Don't Understand," and like it was recorded partially in Nashville under the aegis of Chet Atkins and Dick Pierce. The two naturally brought a slight country feel to some of the tracks, notably the remakes of Don Gibson's 1958 hit "Oh, Lonesome Me" and the 1960-1961 hit "My Last Date (With You)" (aka "Last Date"). But the closest approximation of the sound was the kind of country-inflected pop/rock being pursued by Elvis Presley around the same time, which made a rendition of Presley's first major hit, "Heartbreak Hotel," an appropriate choice. At 20, Ann-Margret was an effective singer, if something of a chameleon, seeming to adopt a different persona for each number. She was at her most seductive singing Otis Blackwell's "Slowly," and she came on like a Latin fireball on "Fever," but was demure on the singles-chart entry "What Am I Supposed to Do" and ingenuously winning on "Moon River." RCA Victor appears to have been hoping it had found a distaff Presley, and it's possible Ann-Margret might have justified such a hope if her film acting career hadn't quickly outpaced her recording career; by the time this album was released, her movie debut, Pocketful of Miracles, had been out for several months and State Fair, which would establish her as a redheaded bombshell, was just getting into theaters. (She was still a mousy brunette on the album cover.) On the Way Up was an appropriate title, but records would soon take a back seat to other career goals.
1. Oh, Lonesome Me (02:34)
2. Slowly (02:05)
3. Fever (02:49)
4. What Do You Want From Me (02:29)
5. Heartbreak Hotel (02:26)
6. I Just Don't Understand (02:37)
7. His Ring (02:20)
8. Could It Be (02:10)
9. What Am I Supposed To Do (02:44)
10. Let Me Go, Lover! (02:58)
11. Moon River (02:28)
12. My Last Date (With You) (02:37)

tags A, Girls, US