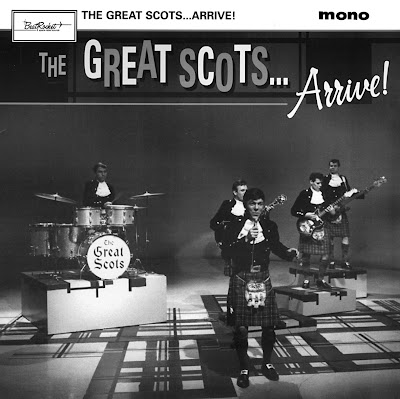 Band was formed in 1962 and was initially known as The Beavers. Well known in Canada for their gimmick matching "Mohawk" haircuts. In December 1964, band traveled to New York City to meet with Columbia Records and their manager suggested a name change. It was decided that they should all wear Scottish kilts on stage as a new gimmick to draw attention to the band. (Their hair had grown out by now.) Released three singles for Epic Records during 1965 and appeared on several US television shows "Shindig!", "American Bandstand", "Where The Action Is", etc. Band then signed with Triumph Records in 1966 and issued two singles as "The Great Scots" and one as "The Free-For-All" on Challenge Records. The idea of releasing a single under a different name was an attempt to get airplay at stations that weren' t playing The Great Scots - the one-off single was more R&B oriented than their usual British Invasion fare. At this time the band performed primarily in Canada and the southwestern United States. While working on their first album in October 1966, the US armed forces drafted the band's bass player and the LP was never completed. Although a Canadian citizen, he had been working with a permanent visa which left him susceptible to the military draft.

This vinyl-only long-play issue brings together ten songs that didn't make the final cut of Sundazed's CD retrospective on this Halifax rock & roll band. All the tunes aboard were recorded in 1965 and feature the group's hard-rocking style well to the fore. With the exception of Little Richard's "Lucille" and two songwriter's handouts, the other seven selections emanate from the pens of group members Bill Schnare or Gerry Archer. Besides the novelty of the vinyl-only format, the music makes an excellent addition to this group's scanty discography.