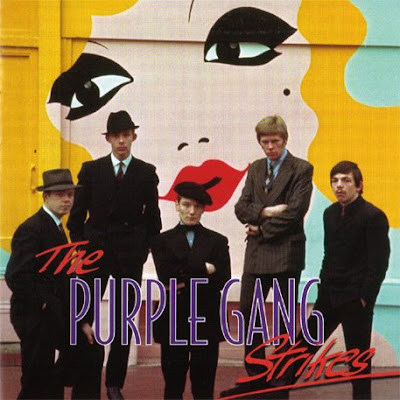 The Purple Gang were more '60s jug band revivalists than they were anything else, but they have sometimes been lumped into the psychedelic scene due to the company they kept. Formed in Stockport Art College in England in the mid-'60s, they found a deal with the British folk label Transatlantic, who referred them to producer Joe Boyd. Though American, Boyd was already a mover and shaker in London as a budding producer (with early Pink Floyd), a representative for Elektra Records, and a co-runner of the legendary underground rock/psychedelic club the UFO. Boyd produced their 1967 single "Granny Takes a Trip," which, despite one word in the title, was not about acid. In reality it was a pleasant jug band tune with a morsel of pop/rock influence. The BBC, however, felt otherwise and banned it from its airwaves.

This setback contributed to the Purple Gang breaking up after just a couple of singles and one album (which included those singles), Strikes. Actually, much of the LP was standard good-time jug band music, rather reserved even by the standards of '60s jug band revivalism, though it was entirely comprised of original compositions. The only psychedelic thing about the Purple Gang was their milieu. They found their largest audience, for whatever reason, in the underground rock crowd, including the one at the UFO, where the "Granny Takes a Trip" single would often be played.

The Purple Gang did reorganize in the late '60s in a more electric incarnation, but could not get a record deal. Purple Gang founder Joe Beard re-formed the band in the late '90s with three new members, recording a CD and playing live gigs. 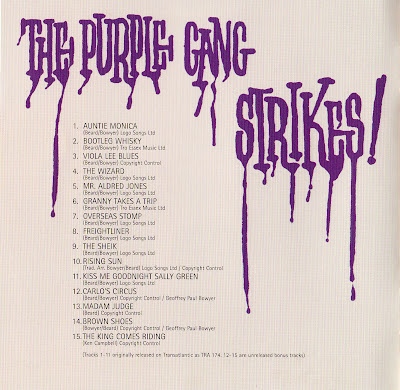 The Purple Gang's sole record is an oddity, not comfortably fitting into any of the scenes -- folk, folk-rock, psychedelia -- with which some historians have associated it. Actually, it's moderately engaging, moderately modernized jug band music, quite mild even compared to the better revivalists of the style in the 1960s, like Jim Kweskin or Dr. West's Medicine Show & Junk Band. There's little hint of electric rock or psychedelia, and one's left with the feeling that you had to be there to get hip to what made them hip, or that they wouldn't have been that interesting even if you were there. Tossing expectations aside and just judging what's on the platter, it's OK jug band revival music, albeit with wholly original material. It's also pretty restrained, almost to the point of gentility, in its fervor and humor. A bit of the hippie acid-folk vibe seeps into one of the better and more mysterious cuts, "The Wizard," which actually does have a trilling electric guitar. A wee bit of British pop-psych bonhomie also colors "The Sheik," "Kiss Me Goodnight Sally Green," and their most famous track by far, "Granny Takes a Trip" (which is still jug band-based, despite the psychedelic implications that some read into the title). Ultimately, though, it's surprisingly tame and ordinary.