Eden Kane: Well I Ask You: The Complete 60s Recordings 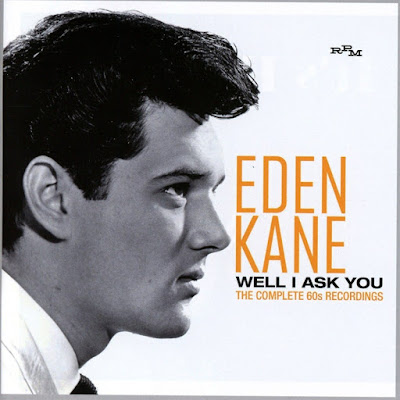 Eden Kane
Well I Ask You: The Complete 60s Recordings
RPM Records
2CD
====================================================================
The chiseled good-looking Eden Kane was briefly a British pop phenomenon, thanks in part to a charming singing voice, hip pop arrangements, and superb song choice. His modest charting career produced a handful of excellent singles, some superb American covers, and enjoyable, wholesome fare that invokes the innocence of the pre-British Invasion pop era. Well I Ask You: The Complete Sixties Recordings offers up all of his releases during that very busy decade, plus a handful of post-Sixties singles, to give the listener the full Eden Kane experience.
Eden Kane was the pseudonym of Richard Sarstedt, the brother of equally notable musical siblings Clive and Peter Sarstedt. While his brothers were more singer/songwriter-minded, Richard—whose management changed his name to the more palpable Eden Kane—was spotted as a potential pop star. In 1960, Pye Records released debut single “You Make Love So Well,” a promising number, backed with “Hot Chocolate Crazy,” a number that highlighted his Elvis Presley-like style with the sort of dreadful song that soon would become Presley’s standard fare. The single didn’t perform well, and he soon was released from the label.
But his management scored him a deal with Decca Records, and his next single, 1961’s “Well I Ask You,” was a smash hit that went to the top of the charts. Understandable, really, as the song itself has a wholesome vibe that reminds of Bobby Darin and Buddy Holly; it’s a British song, but it’s a very American-sounding song. His follow-up singles, “Get Lost” and “Forget Me Not,” also released in 1961, would also be top ten hits that traded on the American influence. That would become Kane’s trademark style; soulful pop/rock that would appeal to fans of Presley, Bobby Darin, Ricky Nelson, and Dion. This influence would be felt on numerous album tracks, where he turned in wonderful covers of such classics as “Smoke Gets In Your Eyes,” “I (Who Have Nothing),” and “On Broadway.” But surprisingly, the prolific release schedule would seemingly flood the market, and his follow-up releases failed to chart, in spite of heavy promotion.
Yet in hindsight, that’s quite understandable. Eden Kane’s big-band pop style would soon be eclipsed by the harder rock sounds of the British Invasion; the lush Buddy Holly-esque “Boys Cry,” came in January of 1964, mere weeks before the Beatles broke internationally. Though talented, his music suddenly felt idiosyncratic; lush pop crooning now passé in the face of louder, harder, and more aggressive rock and roll; “Rain, Rain Go Away,” his follow-up single to “Boys Cry” sounds positively retro compared to what was on the charts at the time. Though follow-up singles were lovely, they simply failed to connect to the listening audience. “Magic Town” finds him turning in a Tom Jones-style performance; his final single, “Gotta Get Through To You,” is an attempt to be a bit more contemporary, and though it’s jaunty and upbeat, Kane sounds out of his element.
Though the times were changing, Kane took it in stride; a tour of Australia to promote “Boys Cry” found him enjoying his trip, and he soon relocated, taking on work as a lounge act; he would soon relocate to Hollywood. He would also start recording with his brothers, and would release a solo album under his name, while “Eden Kane” would record sporadically, and these singles are included here; “Reason To Believe” is a lush, Glen Campbell-style ballad, while “Played It Like A Fool” is a jaunty Vegas-era Elvis meets Gerry Rafferty number that’s quite enjoyable. Though he let his singing career go in the Eighties, he would soon find steady work as an actor in the Star Trek series, and in recent years he returned to making music, releasing a steady stream of albums.
Music still continues to be a passion for Kane, and even though the highs of Well I Ask You lasted only a short time, the music he made in his heyday has aged well, as shown here. This collection captures the work of an underappreciated talent worthy of rediscovery, and as it’s generously filled with fifty gorgeous little gems of pop songs, it’s a smorgasbord of delightful early Sixties pop  fare. 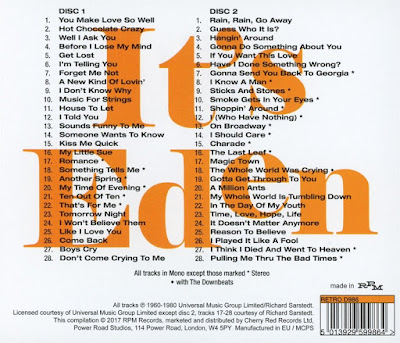