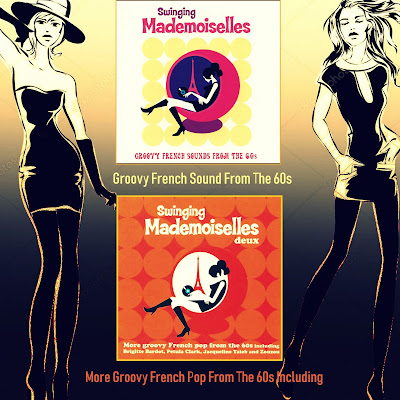 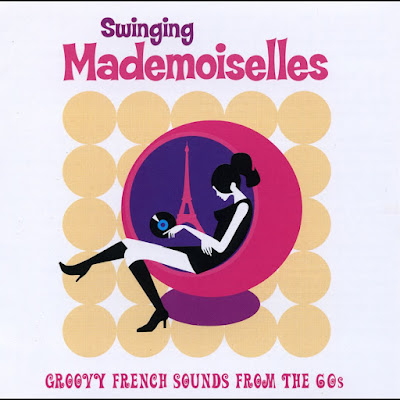 In his liner notes to Silva America's compilation of female-sung French pop songs of the 1960s, Swinging Mademoiselles: Groovy French Sounds from the 60s, Peter Compton, writing of the "yé-yé" movement that responded to American and British pop of the era, writes that "Sylvie Vartan, Françoise Hardy, Sheila, and France Gall were the biggest stars of the genre...." None of those singers appear on this collection, which instead features 18 selections by 14 lesser-known names. They are, however, uniformly winning, whether they are attempting to rock out, as Jacqueline Taieb does on the album-opening "7 Heures du Matin," when she approximates the stutter of Roger Daltrey and the nonsense syllables of Little Richard, or settling for catchy pop, as Christine Pilzer does on the 1920s-style "Cafe Creme." Rock tends to take a back seat to projections of personality and feminine verve on these tracks, notably Elizabeth's cocky and kooky "Je Suis Sublime," which recounts a sort of "My Favorite Things" list of what she considers life's joys, all of which add up to make her the sublime person she is. But there are some light rockers, such as Clothilde's "Et Moi, et Toi, et Soie" and Liz Brady's tongue-twisting "Palladium (The Hip)." The British influence is overt in two songs brought across the English Channel, "Je Suis la Tigresse," Delphine Desyeux's take on Lulu's U.K. hit "I'm a Tiger," and "Plus Tard," Katy David's French translation of "Call Me," originally recorded by Petula Clark, herself a mainstay of the French charts. But the overall enjoyment provided by the collection is somewhat dampened by the lack of real stars, as well as by the sometimes iffy sound quality. Oddly for what appears to be a legitimate licensing project, the tracks seem to have been mastered from old records, and pops and crackles are audible on several of them. 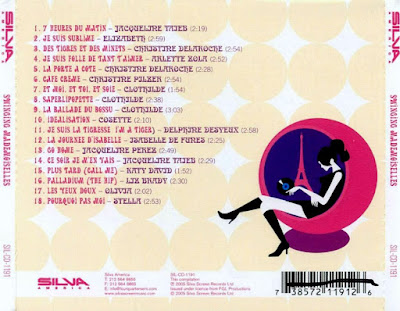 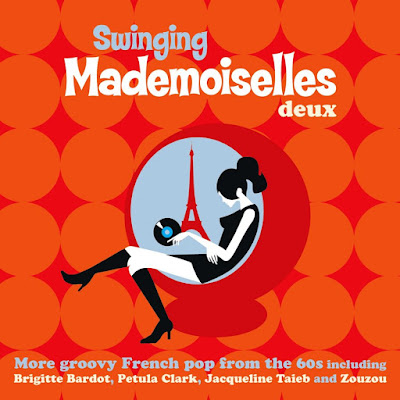 Although, as its title suggests, Swinging Mademoiselles Deux is the follow-up to the earlier collection Swinging Mademoiselles: Groovy French Sounds from the 60s, it is actually a better album than its predecessor. Once again, the contents have been assembled from French pop records featuring female singers that roughly correspond to the era of Swinging London, say, 1966, hence the title. These are the equivalents to the contemporaneous British hits of Marianne Faithfull, Cilla Black, and Petula Clark. In fact, the exact French equivalent to Petula Clark is...Petula Clark herself, who was just as big a star in France singing in French as she was in Britain and America singing in English. Here, she takes on a French adaptation of the hit "Needles and Pins" with an entirely different lyric, called "La Nuit N'en Finit Plus." Her inclusion on the album points to its superiority over its predecessor. While some of the biggest stars of what was called the yé-yé movement in French pop are still missing, many of the singers here are better known than the ones on the first disc. As the subtitle puts it, the album contains "More groovy French pop from the 60s including Brigitte Bardot, Petula Clark, Jacqueline Taïeb [who actually was on the first album] and Zouzou." Bardot's selection, "Ecoute le Temps," the theme from the TV show Saint-Tropez...Vole, actually bears a 1971 copyright, but no matter. This is still music that sounds like the mid-'60s, shortly after the Beatles arrived and before psychedelia set in, an eclectic, fun time when songs had harpsichord solos (Maryene's "Cette Fille N'est Rien Pour Lui") or borrowed the sound of the Kinks' "You Really Got Me" (Pussy Cat's "Acune Fille au Monde [Power of Love]"). In France as well as England and the U.S., it was a silly, entertaining interlude in pop, captured again on this album. (A disclaimer inside the CD booklet explains the occasionally uneven sound quality as "due to unavailability of certain master recordings," resulting in the use of old records instead.) 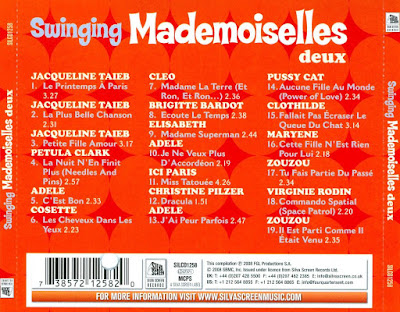