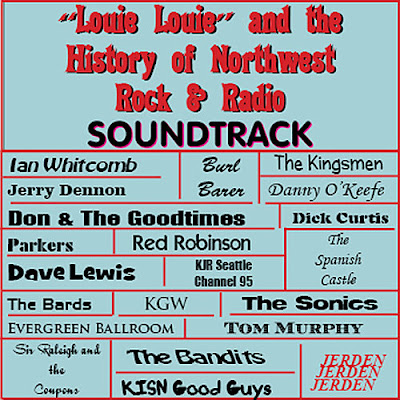 The story, as told by Jerden Records founder and record producer Jerry Dennon, on this DVD begins in the early 1960s and encompasses the music, recordings, record labels, radio personalities and of course Louie Louie . It features the artists that were recording and performing at the great teen dance halls in the Pacific Northwest: Sonics, Kingsmen, Don & The Goodtimes, Ian Whitcomb, Bards, Bandits, Sir Raleigh and the Coupons, Pageboys, Dave Lewis, Frantics, Danny O Keefe, Paul Revere & The Raiders, Dimensions, Springfield Rifle, The Bumps, Merrilee Rush, Fleetwoods, The Wailers. Some of the Air-Personalities that teens were listening to on KJR & KOL in Seattle and KISN & KGW in Portland: Tom Murphy, Red Robinson, Burl Barer, Dick Curtis. Included are video clips, audio recordings, photos, testimonials and interviews. It s the story behind the Northwest Sound that had a hold on the Seattle-Portland-Spokane area for just a few years in the 1960s and 1970s. Teens flocked to the dance venues......listened religiously to their local Top Forty radio stations.......purchased records being released by the area labels: Jerden, Dolton, Etiquette, Seafair Bolo. It was a span of about a decade that can never be repeated. But the story lives in the hearts and minds of those who were there and those who were creating, producing, recording, performing, broadcasting and enjoying an era that goes down in the history books of the Pacific Northwest.