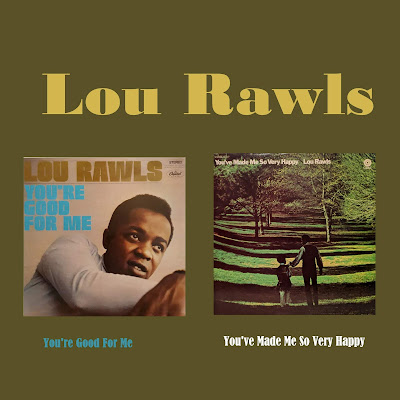 From gospel and early R&B to soul and jazz to blues and straight-up pop, Lou Rawls was a consummate master of African-American vocal music whose versatility helped him adapt to the changing musical times over and over again while always remaining unmistakably himself. Blessed with a four-octave vocal range, Rawls' smooth, classy elegance -- sort of a cross between Sam Cooke and Nat King Cole -- permeated nearly everything he sang, yet the fire of his early gospel days was never too far from the surface. He made his name as a crooner, first by singing jazz standards, then moving on to soul in the mid-'60s, and capped the most commercial phase of his career with a productive stint at Philadelphia International during the latter half of the '70s. Even after his days as a chart presence were over, Rawls remained a highly visible figure on the American cultural landscape, pursuing an acting and voice-over career in addition to his continued concert appearances, and doing extensive charity work on behalf of the United Negro College Fund.

Louis Allen Rawls was born in Chicago on December 1, 1933, and was raised on the city's south side by his grandmother. He sang in the choir at his Baptist church starting at age seven, and became interested in popular music as a teenager by attending shows at the Regal Theatre, with genre-crossing singers like Joe Williams, Arthur Prysock, and Billy Eckstine ranking as his particular favorites. Rawls also tried his hand at harmony-group singing with schoolmate Sam Cooke, together in a gospel outfit called the Teenage Kings of Harmony. Rawls moved on to sing with the Holy Wonders, and in 1951 replaced Cooke in the Highway Q.C.s. In 1953, when Specialty recording artists the Chosen Gospel Singers swung through Chicago on tour, they recruited Rawls as a new member; he made his recording debut on a pair of sessions in early 1954. He later joined the Pilgrim Travelers, but quit in 1956 to enlist in the Army as a paratrooper; upon his discharge in 1958, he returned to the Travelers and embarked on a tour with Cooke. It nearly cost Rawls his life -- during the Southern leg of their tour, the car Rawls and Cooke were riding in crashed into a truck. Cooke escaped with minor injuries, but another passenger was killed, and Rawls was actually pronounced dead on the way to the hospital; as it turned out, he spent five and a half days in a coma, did not regain his full memory for another three months, and took an entire year to recuperate.

You're Good For Me

Produced by David Axelrod with excellent arrangements by H.B. Barnum, You're Good for Me is one of Lou Rawls' best Capitol LPs and a good showcase for his earthy vocals. "Down Here on the Ground" was used in the Paul Newman/Strother Martin jail flick Cool Hand Luke. "Soul Serenade" and "You're Good for Me" are some tracks that can be found on Anthology issued June 6, 2000. 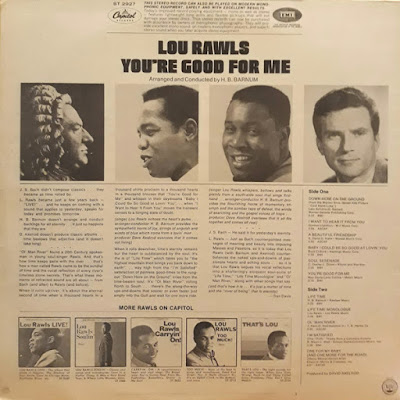 You've Made Me So Very Happy

Lou Rawls could possibly be mistaken for Mr. Lady Love himself, the guy who hopes to see you when he gets there and wants you to sit down and have a talk with him. Thinking of him only as a candidate for next week's Ally McBeal episode is not entirely accurate, considering the artist's output as a whole. Although his contribution to the late-'70s disco era might prove him a companion to the Barry Whites and Manilows of this world, Rawls originally started his career as a gospel-based R&B singer. In terms of chart success, he definitely was an important force behind Philly soul. But initiators Gamble & Huff were nowhere near when he made his first blues and jazz-oriented records. By the middle of the '60s, Rawls joined hands with a young genius named David Axelrod. "Mr. Most Wanted Breaks" produced and composed some of the highest sought after vinyl by crate-digging hip-hop fans. Among these records were a couple of collaborations with Rawls, with whom Axelrod made over a dozen albums between 1965 and 1970. Like most of these, the choice of repertoire for You've Made Me So Very Happy consisted almost entirely of songs by different writers, as Rawls was largely known as a performer. The records gradually evolved from jazz to soul and, with this one, they moved into a more rock-oriented territory. Cuts like "Mama Told Me (Not to Come)" and "You've Made Me So Very Happy" are well done, but were already made famous by Three Dog Night and Blood, Sweat & Tears. The latter's rolling piano intro was sampled by De La Soul (for "I Am I Be") and the song undeniably inherits Axelrod's magic touch. Rawls/Axelrod are invincible in reworking Traffic's "Feelin' Alright," a standout track, together with the subtle delivery of "Let's Burn Down the Cornfield." Finally, there's the beautiful "How Can That Be," which Axelrod and Rawls wrote together; though not as memorable as 1967's "Dead End Street," it's still exemplary of what they were capable of. After this album, their fruitful collaboration would be put on hold for more than 30 years. On account of "Loved Boy," the closing piece Rawls did for Axelrod's 2001 comeback album, you wouldn't say their minds ever parted at all. 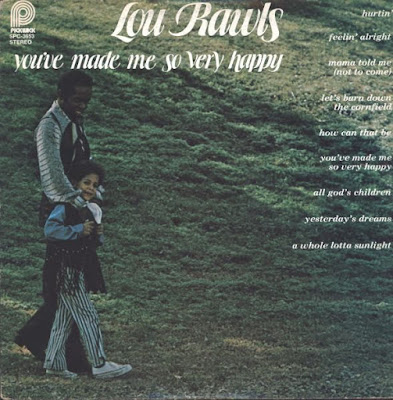