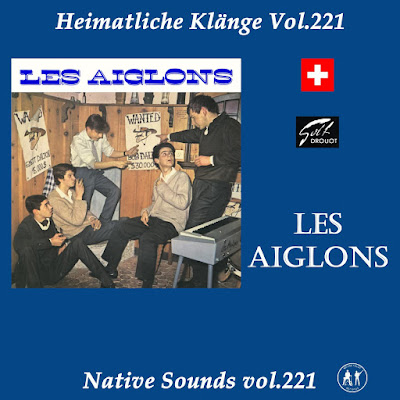 221 heimatliche klaenge - Native Sounds
Les Aiglons (CH)
Four young Swiss teenagers, living in Lausanne on the Leman lakeside, set up a band in 1961, they choose the name les aiglons (eaglets), because they have a strong leader Léon Francioli, which behaviour make them think of Napoleon, which symbol was an eagle, so they felt like eaglets!
Les aiglons line up was: Léon Francioli, lead guitar, Laurent Florian, rhythm, Antoine Ottino on bass, and Jean Schmalz on drums. In April 1962 Christian Schlatter joins the band in place of Jean Schmalz. At the end of the year the band has got a new member: Jean Marc Blanc on piano /organ.
They played shadows tracks and self penned pieces. This was their first strong point, they had their own tracks, and the second point was their sound. They decided to include an organ and work a lot on getting their own distinctive sound.
The break point was the decision to go to the Golf Drouot in Paris, the place for young Rock and Rollers. They were programmed on January the fourth in the weekly contest organised by the Golf Drouot manager Henry Leproux. Furthermore they happened to be the first Swiss band to play at Golf Drouot. After their set they met with an A&R working for Barclay, a big French label, Ken Lean, who was also a Swiss living in Paris. They are invited to make a trial hearing at Barclay’s studios. Ken advised them to keep on working hard, and promised visit them in April in Lausanne.
At the beginning of the spring Ken Lean came and listened to the progress made by the band. He left with a recording of some tracks in the pocket. Les Aiglons have now got a better sound thanks to the sound technique of Laurent Florian and his mother who has invested in new equipment, they now played with fender and a superb drum kit.
At the end of April 1963, big news from France, Barclay was ready to sign them, they mare booked in the recording studio avenue Hoche for 20,21 and 22 may. Their rehearsed their self penned tracks Stalactite, Christine and Marie line as well as T’en vas pas a song written for the Eurovision contest, by Emile Gardez and Géo Voumard.
In the studio Ken lean is working hard on sound effects and add a second drummer: Armand Molinetti, a session drummer who played with les Chats Sauvages one of the top French bands.
Until mid June nothing happened, and Les aiglons were a bit puzzled. But suddenly Stalactite is broadcasted on the teenagers program Salut les copains, Daniel Filippachi , the disc jockey has chosen stalactite as the track of the week. The teenager like the tracks and it went in big demand in the record shops. Now Les aiglons had to tour all over France with the usual summer tours; it was a bit of a problem for Antoine Ottino, he was only 15 years old and his parents were not very enthusiastic with this prospect. Anyway proud of the success got by their son they let him go. With the Radio Luxembourg they were booked for 2 months in the holiday resorts from Cabourg in Normandy to the Riviera.
This summer tour is still their best memory, it was such a life!
In October they went again in the studio avenue Hoche and cut their second Ep. It was a hard job, their made 52 takes of panorama, and their next coming hit! Then they were billed on another tour sponsored by a teenager mag Age Tendre, on top of the bill was Gene Vincent backed by a very good instrumental band les Sunlights, Les Chats sauvages, with whom they became friends, were ending the first part.
Then back to Switzerland they toured in the french speaking part of the country with Les Sorciers another good local instrumental band (they issued two eps for Barclay in 63/64), and Tony Frank a local rocker. In 64 they left their manager Ken Lean. The band was so good that one of the French teenage idol Claude François offered them to back him. But the parents of two of the young eagles declined this proposal. They cut a new record with Tennessee and Troika penned by JM Blanc, the organ player. He played à la Booker T .
Then the group split, Christian Schlatter on drums and Léon Francioli were the only to stay, they were joined by Michel Saugy, Sorciers’ guitarist, Cookie Oreste took over JM Blanc on organ and Michel Klaus came on bass for Antoine Ottino. Their fifth ep with Roscoe, Patricia, reverie and California was a flop.
In 1966 the group definitely stopped, it was time for the young guy to go back to school!
Today Léon Francioli is famous bass player; he is the only one who made his way as a musician. J.M Blanc is managing an engineering company, Laurent Florian is working at Kodak, Antoine Ottino has taken over the house painter family company, but he still play for fun. Christian Schlatter like his father is now a journalist in Le Matin, the biggest French speaking daily. He is also still active with a new band the Hollywood Hunters…
http://www.guitaresetbatteries.com/en/les-aiglons-swiss/
https://www.discogs.com/artist/2224235-Les-Aiglons-2
01 - Stalactite
02 - T'en Va Pas
03 - Christine
04 - Marie-Line
05 - Panorama
06 - Dans Le Vent
07 - De L'amour
08 - Expo 64
09 - Rosko
10 - Patricia
11 - Rкverie
12 - California
13 - Tennessee
14 - Europa
15 - Troпka
16 - Sunday Stranger (Bal. 10-10)
***
Posted by: D&J на 21:40