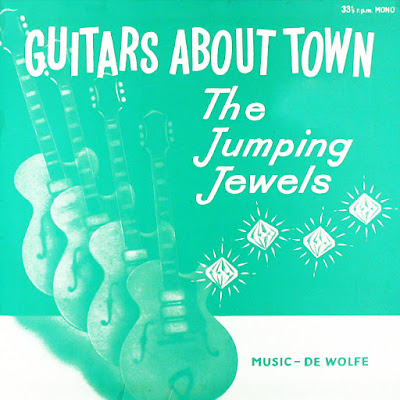 In the pre-Beatles era (the Fab Four visited The Netherlands in early June 1964), Johnny Lion & The Jumping Jewels were one of the Dutch top bands comparable to England's Cliff Richard & the Shadows. They got together in 1960 when singer Jan van Leeuwarden sat in with The Real Rhythm Rockers, who comprised Hans van Eijk on "bass" (actually a guitar with thick strings) and Frits Tamminga on drums. They decided to start a band together called Johnny & the Jewels. Joop Oonk became their bass player. After some time, Tjibbe Veeloo joined as rhythm guitarist. They came under the guidance of Herman Batelaan, who got The Jewels a recording contract with the mighty Phonogram organization, and released "Wheels" in early 1961 on the Philips label under a new name, The Jumping Jewels. As it later turned out, only lead guitarist Hans van Eijk played on the records, the backing was done by older professional studio musicians like Kees Kranenburg Sr., drummer of the well-known ballroom orchestra The Ramblers. The band mainly released covers or arrangements of existing songs: "Wheels" was a cover of American band The String-A-Longs and the B-side, "Ghost Riders In The Sky", had been recorded by The Ramrods. Other hits were the theme for the motion picture "Exodus", "Mexico" (a US hit by Bob Moore), the tango "Olé Guapa" (first recorded in 1937 by Malando) and "Guitar Tango", a French song first recorded by Dario Moreno & Tino Rossi, which was later also covered by The Shadows (albeit in an acoustic version).

In 1962, Jan van Leeuwarden (renamed Johnny Lion) also started recording and touring with The Jumping Jewels as his backing band. Incidentally, his first single was "My Bonnie" (in Germany a hit by Tony Sheridan & The Beatles). In late '62, drummer Frits Tamminga suffered a nervous breakdown and was temporarily replaced by Kees Kranenburg Jr., son of their studio drummer. In 1963, The Jumping Jewels released their first album, "Jumping High", a sign that facilities and recordings started getting more and more professional. The combo had a string of hits including "Zuyderzee Blues" (originally by The Ramblers), a South-African song called "Africa" and Eddy Christiani's "Wild Geese". Thanks to the parallel success of Johnny Lion, they became one of the Dutch top acts by mid-1963. Around that time, Kees Kranenburg Jr. replaced Tamminga permanently; he would also play on the following Jumping Jewels records. More hits followed, including "Dakota" (which they'd heard on a Shadows album), Allen Toussaint's "Java" and "Irish Washerwoman", an arrangment of an 18th century Irish tune. In early 1964, they recorded a live album with Johnny Lion at Les Galeries in Scheveningen. It included an instrumental version of The Beatles' "I Saw Her Standing There", a sign the times were changing. The Jumping Jewels had a number 1 hit in Peru - of all places - with this track! And more international success followed when in the spring they did a tour of the Far East, covering Singapore, Malaysia and Pakistan. The domestic success continued with two more hits, "Zambesi" and "Jumping Can Can". They recorded a 10-inch album with background music for DeWolfe Music in England, which since then has become a much sought-after collector's item.

In 1965, manager Batelaan got them into show business by booking them for a season at Circus Boltini. Johnny Lion then completely changed style and recorded a song in Dutch without The Jewels, "Sophietje", which went to Number 1. In the fall of 1965, The Jumping Jewels announced they would start backing Lion's biggest rival, Rob de Nijs, whose backing band The Lords had switched to beat music. However, manager Batelaan went to court for breach of contract, preventing the band from using the name The Jumping Jewels. Meanwhile, Hans van Eijk got an offer for a PR job from Koekoek Musical Instruments (importer of Fender) and accepted. The other Jewels then decided to continue as a beat group called The JayJays. Hans van Eijk played on their first single, but by January 1966, he'd been replaced by Frank Nodelijk (ex-Crescents, to Peter Andrew & the Sapphires) and later Leo Bennink (ex-Mack).

In 1971, a "Best Of The Jumping Jewels" album was released, enabling listeners to hear the band in true stereo for the first time. This LP was so successful that Phonogram decided to release a second volume, and so a "Best Of Johnny Lion & The Jumping Jewels" came out in 1973. It led to Herman Batelaan approaching the former band members to record a new album. However, Joop Oonk was too busy with his management company, Tjibbe Veeloo was not interested and Kees Kranenburg Jr. was recovering from a serious road accident. The resulting album, "Forever Yours" from 1975, was done by Hans van Eijk with Paranova members Ernst van Thiel (d) and Hanno Gerritse (b). Fred Brekelmans played keyboards. The album - produced by Hans van Eijck of The Tee Set, not to be confused with Jewel Hans van Eijk! – was, however, not an album in the old Jumping Jewels style, but a set of modern instrumentals with wah-wah effects and synthesizer sounds. Van Eijk then decided to go on the road on the back of the album (with Brekelmans, Rob Houdt on drums and Johan Korringa on bass). Under his own name Van Eijk released some singles and albums over the years.

In 1985, Johnny Lion and Hans van Eijk did a one-off reunion for a radio show. This led to a full-fledged reunion in 1991 of a line-up of Hans van Eijk, Joop Oonk, Kees Kranenburg Jr. and Leo Bennink (who had never been an actual Jewel, but had been in The JayJays with Oonk and Kranenburg) doing a revival TV show with Johnny Lion. It was then announced The Jumping Jewels would tour and record again, but after one single the project slowly petered out. From the mid-1990s, Johnny Lion & The Jumping Jewels performed at special events with Hans van Eijk, Joop Oonk, Tom op 't Hof (d) and Roy Soeriorosero (g, ex-F.B.I.). They even returned to Singapore in December 2003 (with Kees Kranenburg Jr. on drums again) to revive old times.

Hans van Eijk still tours with a band called The New Jumping Jewels, whose bass player is "Hoss" van Hardeveld (formerly of Unit Gloria). The other members are Ruud Jansen (g) and Henk Doove (d). Of the original members, Joop Oonk is a showbiz manager, Kees Kranenburg Jr. is a jazz drummer and Leo Bennink is still very active, playing with his old band The Black Albinos and a project with former Redbone drummer Peter DePoe. Tjibbe Veeloo left the music business in 1967 and claims he hasn't touched an electric guitar 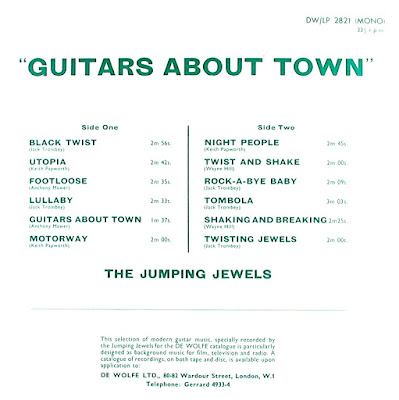