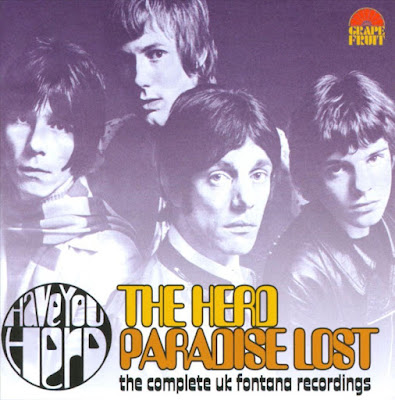 There have been a bunch of CD compilations of the Herd, and this isn't too different from some of the others that have appeared. In fact, it's less extensive than some of the more ambitious ones. So what does it have in its favor? Its aim, according to the liner notes, is to concentrate "on what was undoubtedly the Herd's golden period, assembling their complete U.K. releases during the tumultuous 1967-1969 time frame." In that, it succeeds as a good 24-song compilation, including everything from their half-dozen 1967-1969 U.K. singles and the entirety of their 1967 album Paradise Lost. (To be picky, there would have been room to add the 1967 U.S. B-side "Understand Me.") In addition, the 16-page booklet has excellent liner notes from renowned British rock historian David Wells, along with plenty of period pictures, clippings, and record sleeve repros. Musically, it's the same mixed bag that other Herd compilations offer, from the playful, light psychedelic pop of their Howard Blaikley-written singles to mediocre Walker Brothers-like tracks and their fitful attempts to establish a more respectable identity via their original material. Listening to this, it's easy to grasp why the Herd don't have the cult reputation of markedly less commercially successful British bands of the era like, say, the Creation. It sounds like the work of several groups, almost to the point where you can actually sense the Herd's frustration at not being able or allowed to organically develop their own approach. Only on occasion do you get a glimpse of a genuinely promising band, especially when they get into the moderately heavier and bluesier rock that was obviously closer to their heart, especially on Frampton's brooding "On Your Own," the jazzy instrumental "Impressions of Oliver," and, in a poppier vein, "She Loves Me, She Loves Me Not."