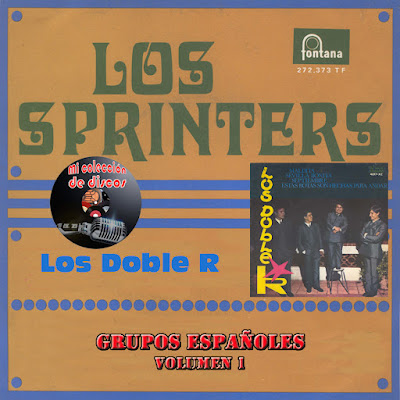 Well, we are going to start an extensive collection in 33 volumes, which consists of the complete discographies of groups that never released Lps, but of great importance in Spanish ye-yé music.
This collection is a private collection that has been made many years ago by friend Lomas, a great record collector from the sixties to the present day and who dedicated himself years ago to digitizing these recordings and creating his collections, which are quite a few and very varied.
Among all of them, one that caught my attention was this one dedicated to different groups, bringing together all their recordings, both in singles and in Ep's.
I have had them as a little treasure for many years. He was publishing them on his old blogs, but in Spain it is difficult to freely publish music from the country without complaints from its authors or record companies, who seem to want to do like the pharaohs: Take their treasures to the grave and seal all the entries. In the end, the blogs closed.
Fortunately, Lomas is still active with his Melopop Music blog, although unfortunately there are no download links. http://melopopmusic.blogspot.com.es
Well, this first volume is made up of two bands, Los "Sprinters" from "La Coruña" who released five Ep's and two Singles, which as usual, many versions and some own compositions, interspersing some instrumentals, and "Los Doble-R" , which were an ephemeral band from Tarragona who only had time to release this Ep, with three songs composed by Spanish composers and the last one the famous "These Boots Are Made For Walking", a song by Lee Hazlewood that led to the success of Nancy Sinatra ..
I hope you like them, and although they are at 128 kbps, they sound very, very good. 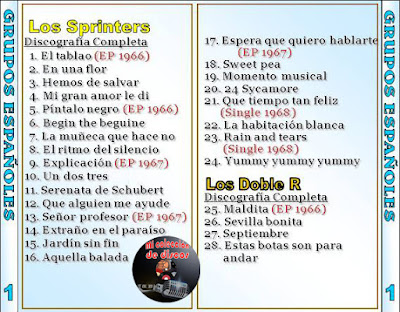