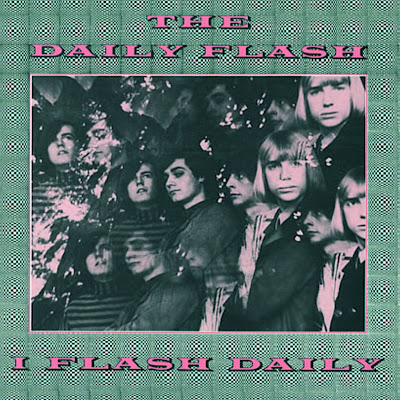 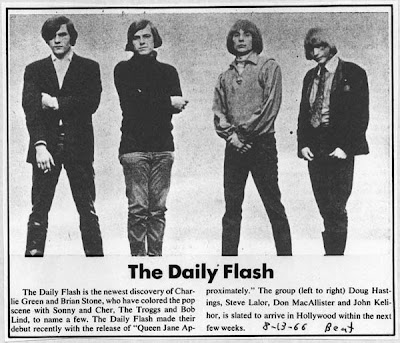 More than any other Seattle group of the '60s, the Daily Flash assimilated the folk-rock and psychedelic sounds of the day into a sound that was both forward-looking and commercial. Specializing in electric rearrangements of contemporary folk songs that emphasized their harmonies and 12-string guitar, the Flash were also capable of psychedelic rock, as on "Jack of Diamonds," which featured blistering feedback guitar. They cut a couple of regional singles and appeared with many of the leading psychedelic groups of the day in California, but never managed to launch their own career or even record an album. Guitarist Doug Hastings played briefly with Buffalo Springfield and was a member of Rhinoceros. They were still playing gigs in the Pacific Northwest in 2005. 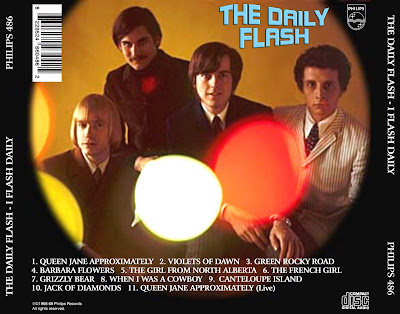 An archival reissue that patches together an entire album by presenting both sides of their two singles with three previously unreleased studio recordings and a couple of lengthy live songs. As interpreters, The Flash showed a great deal of skill, adapting compositions by Eric Anderson, Dylan, Ian Tyson, and Fred Neil to full-blown folk-rock arrangements with a touch of baroque pop. As songwriters, their capabilities were undemonstrated; only one of the seven studio recordings on Side Two is a group original ("Jack Of Diamonds" and Fred Neil's "Green Rocky Road" are erroneously credited to the band). Side Two is a bit of a waste, with a live 1967 cover of Herbie Hancock's "Canteloupe Island" and an okay live 1966 rendition of Dylan's "Queen Jane Approximately" (which they had covered on their first single).
Posted by: D&J на 20:26