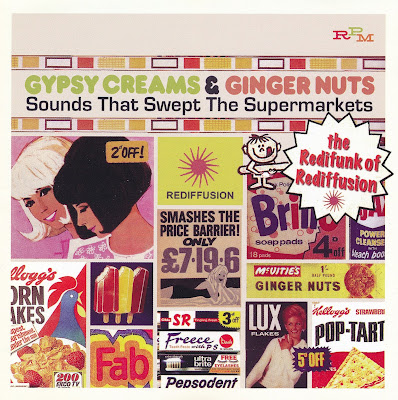 The British Rediffusion company recorded quite a bit of music intended for background in environments such as supermarkets, releasing much but not all of it commercially. This unusual -- to say the least -- compilation has 25 such tracks from 1968-1974, assembled not as Muzak of sorts for exploitation LPs or other purposes, but as a widely available CD geared toward avid collectors, complete with fine historical liner notes and vintage album illustrations. Muzak is really too harsh a word for this, as it might, particularly in the mind of U.S. listeners, be associated with middle-of-the-road orchestrated instrumentals heard in elevators and such. The cuts on this disc, largely instrumental, specifically reflected the tone of the times, with plenty of influences from psychedelic rock, funk, and soul-jazz. Quite often it sounds like session cats letting their hair down and jamming away on basic grooves. But though it's much wilder relative to what listeners think of as Muzak, background music, or "library music" as it's sometimes referred to in the U.K., it's not really that wild. It's still background music for certain moods, likely for swinging bachelor pads trying to latch on to the coattails of the changing times. So while much of this is acceptable in a Swinging London "go-go mashing up against funk-psych" sort of way, it's probably not going to excite many outside of the circle that collects this sort of incidental music. There are some fairly hot, frenetic organ riffs; Harry Stoneham's "Next of Kingsleigh," for instance, will likely appeal to fans of the likes of Brian Auger. To a lesser degree, there's also some reasonably energetic guitar work with period touches of wah-wah and psychedelic distortion, and even an attempt to mimic a Jackson 5 backing track on Pete Moore's "Solar Wind." The tunes themselves, however, usually aren't that striking, and there are still some traces of MOR pop in the melodies, and in the horn arrangements in particular. Though it wouldn't come as a surprise to learn that some fairly well-known musicians might have been involved in these sessions to pick up some extra cash, the only such connections established with this particular group of tracks are with the British hit songwriting team Ken Howard and Alan Blaikley (who lend their name to the Howard Blaikley Orchestra's cover of "Hold Tight," a U.K. hit for Dave Dee) and Vic Flick (famous as the twanging guitarist for James Bond soundtrack music).