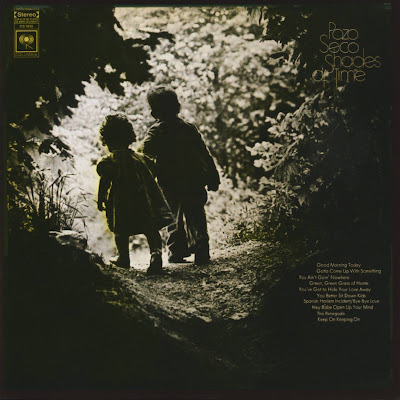 For their third album for Columbia Records, the Pozo Seco Singers underwent some serious changes: original member Lofton Kline was replaced by Ron Shaw, yet on the cover of 1968's Shades of Time, only Don Williams and Susan Taylor were featured, giving the impression they were Pozo Seco (the Singers having being dropped from their name). The shifting lineup was important but perhaps not as important as the instillation of Elliot Mazer as producer. Mazer would later go on to make his name with his productions for Neil Young, but his work on Shades of Time is an early indication of his talents, as he not only helps assemble a good collection of folk-pop songs for the group -- Dylan's "You Ain't Goin' Nowhere" and "Spanish Harlem Incident," Lennon/McCartney's "You've Got to Hide Your Love Away," Ian Tyson's "The Renegade," the Everly Brothers' "Bye Bye Love," and Claude Putman's "Green, Green Grass of Home" are the standards, but the rest of the record contains good songs by Raun McKinnon, Paul MacNeil, and Sonny Bono -- but gives them an appropriately decorated and nimble production. Naturally, there are many trappings of the time -- the earnest harmonies, the occasional harmonica or organ, the understated yet insistent rhythms underpinning it all -- but part of the appeal of Shades of Time is that it evokes 1968, but the album is more than a cultural artifact; it has a sweet, gentle spirit that's quite comforting and ingratiating. Real Gone's 2013 reissue - -the first time this album has seen the light of day on CD -- adds a whopping 11 bonus tracks, all cut between 1967 and 1969. The first six are all produced by Bob Johnston and they're either a little more forceful than Shades of Time -- Johnston emphasizes four-on-the-floor rhythms, keyboards, and electric guitars on "Excuse Me, Dear Martha "-- or softer in their approach. In other words, they're more folk-rock, and they're appealing sonically even if the songs can sometimes be a little calculated (that said, there's Tim Rose & Bonnie Dobson's "Morning Dew," Doug Kershaw's "Louisiana Man," and "Tomorrow Proper," one of Don Williams' first originals). The final five find Pozo Seco recording original tunes with the assistance of legendary country producer Billy Sherrill -- who, according to Taylor in the Real Gone liner notes, provided very little direction in the studio, claiming he knew nothing about folk music -- and even if the subsequent singles are a bit under-produced, there are some gems here, particularly Taylor's "Creole Woman."