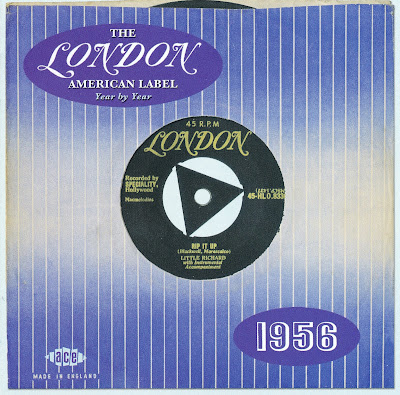 The idea of putting out former "London American" singles in year by year form has long been called for. And here not only has ACE (UK) done so, but these are all the original single versions too, in their as released mono sound. It would be great if once all the years are dealt with, a second or third offering for each year is offered too, as there are thousands of records to choose from.

For me personally, "Drums Are my Beat" by Sandy Nelson in crisp clear mono was reason enough to buy this disc, as until now the only mono versions I could find were those mixed down from the fake stereo LP take and sounded like two pianos were playing.

Track 1 I'd never heard of before, the Coasters in the 1960s, giving a typical 60s funky sort of sound, quite unlike anything I'd heard from them before, not my thing but others will enjoy it.

Track 3 is Ernie "K" Doe and is called "A Certain Girl", this is another slice of that soul/funky style the Americans were putting out at the time.

Track 4 is not one of Jerry Lee Lewis' greatest records, but is not bad either. "I've Been Twistin" jumping on the dance bandwagon.

Track 5 is more typical early 60s pop in the Bobby Vee style etc., The Crickets "He's Old Enough To Know Better" was another I'd not heard in years.

Of the 23 others, all are great sounding, Monster Mash is well known and nice to have it in mono at last, Charlie Rich's "Just A Little Bit Sweet" is early 60s county pop, halfway between Lonely weekends and his later full blow country records.

One Gem for many will be Ben E King's "Ecstasy". Jerry Wallace's "Shutters and Boards" is also considered a Gem if country pop

The disc ends with another classic, Carol King's "It Might As Well Rain Until September", which sounds like the Americans have been listening to some British Joe Meek productions.

To summarise, well worth having, and I intend to purchase the rest of the series as time and pocket permits.