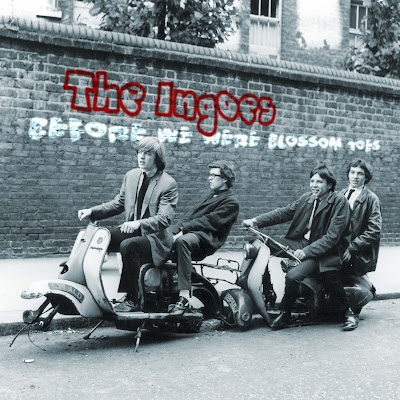 Recorded between 1964 and 1966, this is the first-ever collection of tracks by the quartet that would soon evolve into psychedelic heroes The Blossom Toes. Formed in London, they were managed by the legendary Giorgio Gomelsky (discover of The Rolling Stones and manager of The Yardbirds), and honed their live act in Paris, Spain, Morocco and elsewhere, issuing 45s in France and Italy but not at home. This comprehensive set collects all their studio recordings, as well as previously-unheard demos and a rare live cut that captures their exciting stage act.
Unless you're an obsessive fan of British psychedelic rock, chances are excellent you've never heard of the band Blossom Toes, who cut two albums prized by collectors (and heard by practically no one else) in 1967 and 1969. Then again, if you're the type of listener for whom Blossom Toes are just too mainstream, well how about this -- a collection of rare material by the group that evolved into Blossom Toes? From 1964 to 1966, guitarist Brian Godding and bassist Brian Belshaw were the leaders of the Ingoes, a beat group who played a capable mixture of pop and R&B and for a time were managed by Giorgio Gomelsly (who also handled the Yardbirds). The Ingoes never scored anything approximating a hit, but they had a following in France, released some rare singles, and got to back up Chuck Berry and Sonny Boy Williamson on-stage before the combo was transformed into Blossom Toes during the Summer of Love. Before We Were Blossom Toes includes a handful of previously unreleased demos (documenting fine songs from the group's first guitarist and singer, Eddie Lynch), four tunes from a rare EP released only in France (in which the band tries to kick off a new Gallic dance craze with "Viens Danser Le Monkiss"), not one but two foreign language covers of the Beatles' "Help" (in phonetic French and Italian, which they handle just as well as the Fab Four knew German), and one energetic tune recorded during a live gig. The cover artwork proclaims the Ingoes were "one of the U.K.'s great lost '60s bands," and that's clearly a lie -- this group was good but hardly extraordinary, and whoever convinced these chaps to record "Pistol Packin' Mama" not once, but twice, must have been playing a trick on them. But the covers of "In the Midnight Hour" and "Mister Pitiful" confirm they were improving in their latter days, the handful of original tunes show promise, and any fanatical admirers of Blossom Toes curious about the band's juvenilia will find out all they need to know here. It's an open question, though, just how many such admirers actually exist. (Brian Godding contributes an entertaining and informative essay to the liner notes.) 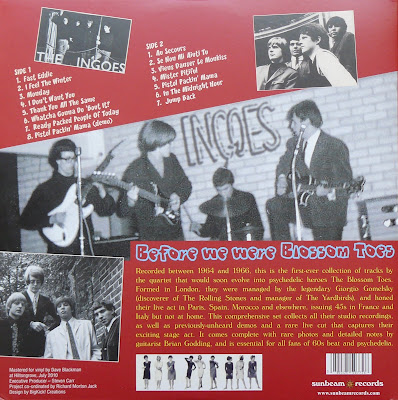 This 15-tracker provides a comprehensive account, through unreleased originals and obscure studio cuts, of British pop-psych band Blossom Toes when they were still a jobbing young R&B combo searching for a voice amidst the flowering beat boom of the mid-‘60s. Formed in London and managed by Giorgio Gomelsky (The Yardbirds), the Ingoes got to play the hip Crawdaddy clubs and the Marquee. But it wasn’t until the group landed a residency at Le Bus Palladium in Paris that they really got their groove on, as exemplified by the closing number, a raucous live version of Rufus Thomas’s “Jump Back” that has the Parisian scenesters going wild. Along the way the quartet recorded two workman-like versions of “Help!”, one in French, the other in Italian, and kick-started a dance craze called Le Monkiss; it’s the four tracks which made up the original EP Viens Danser Le Monkiss in ‘65, including a sensational version of Wilson Pickett’s “In the Midnight Hour”, that provide the album highlights. Although highly enjoyable and with insightful liner notes by band guitarist Brian Godding, there’s nothing here to suggest that just twelve months later, they’d be singing a song about “Mrs Murphy’s Budgerigar”.
http://www.garagehangover.com/?q=Ingoes
http://www.terrascope.co.uk/MyBackPages/BlossomToes.htm
Taken at http://musicmp3spb.org
Posted by: D&J на 22:44