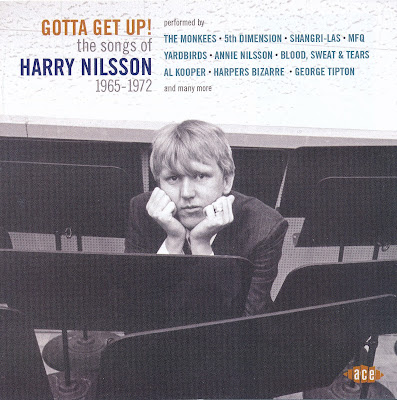 Gotta Get Up! The Songs of Harry Nilsson 1965-1972 Review by Stephen Thomas Erlewine.

Pay attention to the subtitle of Gotta Get Up! The Songs of Harry Nilsson 1965-1972, another noteworthy installment in Ace's ongoing songwriter series. Every one of the 24 songs on Gotta Get Up! was written between 1965 and 1972 -- in other words, the period when Nilsson could be quantified as a Los Angeles eccentric, not a pop madman. Nilsson still could write a standard after 1972 -- "He Needs Me," from the Popeye soundtrack, proves that he could still do so as late as 1980 -- but his work grew increasingly idiosyncratic over the course of the '70s, leaving him as the only imaginable interpreter of a song like "How to Write a Song." Nilsson knew how to write a song, carving out a place between the personal and universal, as this odd and wonderful compilation proves. What's striking about Gotta Get Up! is how no matter the performer, the personality that shines through is Harry's. Perhaps that's due to Nilsson's unique blend of Tin Pan Alley and the Brill Building, a craft that was warped by the sun and glitz of Hollywood. His showmanship meant that he could attract showbizzers like José Feliciano and Andy Williams, but his flair for the baroque also meant that his songs sounded equally comfortable performed by such chamber-psychedelia outfits as the Family Tree and Harpers Bizarre. His true kindred spirits, though, were the Monkees, a collective of musicians and actors who ushered such underground talents as Nilsson into the mainstream. Listening to "Cuddly Toy" -- one of two Monkees recordings here -- it's evident that they knew how to sell his knack for sly savagery with a smile, a skill that evades some other singers heard on this collection. Still, there are pleasures in the straightforward readings of "1941," presented here by Tom Northcott, and "Best Friend," which is performed by Sandy Salisbury under the pseudonym Puppet: they show that the original songs and arrangements are so well crafted they can be effective when cut by other singers. Elsewhere, there are some nicely elevated psychedelic readings -- Al Kooper's "Mournin' Glory Story" rivals the Yardbirds' "Ten Little Indians" -- but for Nilsson diehards, the real pleasure in Gotta Get Up! is how it collects songs Nilsson never recorded. "Hey Little Girl (Do Ya Wanna Get Married)," one of his first completed songs, is here in a percolating version by Jimmie Cross, and there are two co-writes with Phil Spector (the Shangri-Las' "Paradise," a girl group number distinguished by a keening melody, and the MFQ's "This Could Be the Night," which finds the two attempting Brian Wilson) along with the gorgeous melancholic "Let Me Go" and a teenage melodrama called "The Next Day" from Debbie Burton. These don't just fill in forgotten corners of Nilsson's work, they help illustrate how Nilsson could write in several different idioms without ever abandoning his signatures. That's just one of many ways he was a truly remarkable figure in 20th century pop music, and it's good to have it documented on this fine collection.