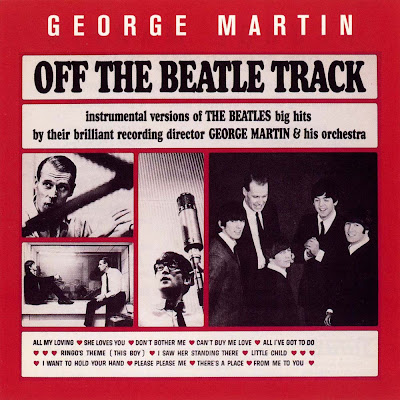 George Martin was riding a whirlwind in 1964 -- in the midst of his second full year of success as the producer of the Beatles' music, now extended to America, he decided to avail himself of the opportunity to record his first album formally credited to him. And naturally it was an album of Beatles songs. Unfortunately, Martin wasn't shooting for posterity at the time -- it wasn't clear how long this Beatles craze would or could last -- he did create perfectly tasteful orchestral renditions of their music, somewhere between extremely light jazz and big-band pop. The way in which he personally resonates to the group's music is very obviously a long way from what most of the group's fans heard for themselves, and for completists and fanatics there might be some insights to be gained about his professional relationship to the Beatles' songs, as represented here; but for most casual listeners, apart from those with a fondness for elevator music, this will be an exercise in music making that can just as well be skipped.
1. George Martin - She Loves You (2:15)
2. George Martin - Can't Buy Me Love (2:01)
3. George Martin - Don't Bother Me (2:52)
4. George Martin - All I've Got To Do (2:14)
5. George Martin - I Saw Her Standing There (2:04)
6. George Martin - All My Loving (2:46)
7. George Martin - Please Please Me (1:48)
8. George Martin - I Want To Hold Your Hand (2:19)
9. George Martin - From Me To You (1:49)
10. George Martin - Little Child (1:45)
11. George Martin - This Boy (2:13)
12. George Martin - There's A Place (1:49)
Posted by: D&J на 19:31