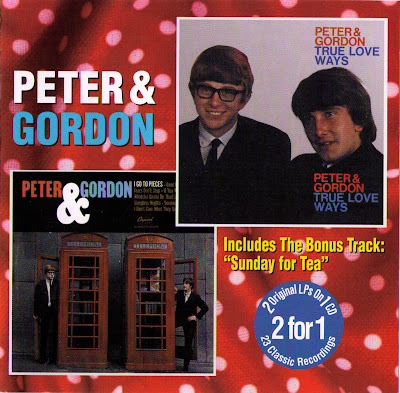 In June 1964, Peter & Gordon became the very first British Invasion act after the Beatles to take the number one spot on the American charts with "A World Without Love." That hit, and their subsequent successes, were due as much or more to their important connections as to their talent. Peter Asher was the older brother of Jane Asher, Paul McCartney's girlfriend for much of the 1960s. This no doubt gave Asher and Gordon Waller access to Lennon-McCartney compositions that were unrecorded by the Beatles, such as "A World Without Love" and three of their other biggest hits, "Nobody I Know," "I Don't Want to See You Again," and "Woman" (the last of which was written by McCartney under a pseudonym). But Peter & Gordon were significant talents in their own right, a sort of Everly Brothers-styled duo for the British Invasion that faintly prefigured the folk-rock of the mid-'60s. In fact, when Gene Clark first approached Jim McGuinn in 1964 about working together in a group that would eventually evolve into the Byrds, he suggested that they could form a Peter & Gordon-styled act.

Asher and Waller had been singing together since their days at Westminster School for Boys, a private school in London. "A World Without Love" was their biggest and best hit, one that sounded very much like the Beatles' more pop-oriented originals. Their other two 1964 hits, "Nobody I Know" and "I Don't Want to See You Again," were pleasant but less distinguished. Sounding like McCartney-dominated Beatle rejects (which, in fact, they were), the production employed a softer, more acoustic feel than the hits by the Beatles and other early British Invasion guitar bands. "I Don't Want to See You Again" used strings, as would several of the duo's subsequent hits, which became increasingly middle-of-the-road in their pop orientation.
Some scattered folky B-sides showed that Asher and Waller may have been capable of developing into decent songwriters, but like many of the less talented British Invaders, their lack of songwriting acumen and ability to move with the times would eventually work against them. They did continue to hit the charts for a couple of years, with updates of the oldies "True Love Ways" (Buddy Holly) and "To Know You Is to Love You" (a variation of the Teddy Bears' "To Know Her Is to Love Her"). There was also a Top Ten cover of Del Shannon's "I Go to Pieces," and the brassy, McCartney-penned "Woman." The overtly cute and British novelty "Lady Godiva," though, became their last big hit in late 1966.
After Peter & Gordon broke up in 1968, Asher became an enormously successful producer, first as the director of A&R at the Beatles' Apple Records (where he worked on James Taylor's first album). Relocating to Los Angeles, in the 1970s he was one of the principal architects of mellow Californian rock, producing Taylor and Linda Ronstadt.
I Go To Pieces (1965)
The duo's third album was a versatile but patchy collection. And there was no getting around it: The best tracks, as was the case in many acts of the era, were the hits -- "I Go to Pieces" and the less well-remembered brassy, pounding "Don't Pity Me." They were at their best when they were at their folkiest, as on their nice cover of the Everly Brothers' "Sleepless Nights" and the decent original "Tears Don't Stop," which wouldn't have sounded out of place in the Searchers' repertoire. But they weren't well-equipped to tackle bluesy rock and folk oldies, as they tried to do with Elvis Presley's "All Shook Up" and "A Mess of Blues," Doris Troy's "Whatcha Gonna Do About It" (done better by the Hollies), and Leadbelly's "Good Morning Blues"). Still, it's a slightly above-average British Invasion pop/rock album. It's included in its entirety as half of the two-for-one package I Go to Pieces/True Love Ways on Collectables, which adds their fourth album, True Love Ways, and their 1967 hit "Sunday for Tea." 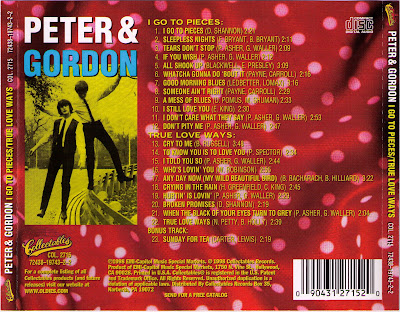 True Love Ways (1965)
Peter & Gordon branched further from their initial pop-folky British Invasion harmony sound on their fourth album, with erratic results. There was an increased tilt toward heavy orchestrated ballads, which could work very well at times, as on the title track, a worthy updating of the old Buddy Holly song (and a big hit on both sides of the Atlantic). Their less impressive reworking of "To Know Him Is to Love Him" (retitled "To Know You Is to Love You") made the Top Five in Britain. However, they weren't well-suited to soul covers like "Cry to Me," and on their solo vocal showcases (Gordon Waller on Smokey Robinson's "Who's Lovin' You" and Peter Asher on "Any Day Now"), they overextend themselves without the support of a harmonizing partner. As for the better tracks, their cover of the Everly Brothers' "Crying in the Rain" was a natural choice, and the melodramatically arranged "Hurtin' Is Lovin'" and the folkier "I Told You So" are two of their better originals. Want some dig-deep trivia? The opening notes of their cover of Del Shannon's "Broken Promises" are identical to the opening notes of the subsequent Neil Young composition "Flying on the Ground Is Wrong," done by Buffalo Springfield on their first album. True Love Ways is included in its entirety as half of the two-for-one package I Go to Pieces/True Love Ways on Collectables, which adds their third album, I Go to Pieces, and their 1967 hit "Sunday for Tea."