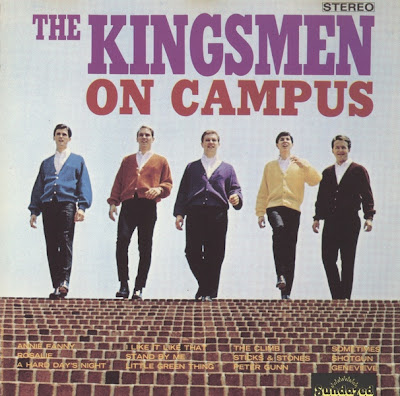 The third album by the Kingsmen (if you don't count the soundtrack to How to Stuff a Wild Bikini). There are 12 tracks on the Wand vinyl release and three bonus cuts on the Sundazed CD version. The minor hit written by Lynn Easton, "Annie Fanny," starts off the album with a suitably Animal House-style vocal, but that annoying crowd noise which permeated some of the Wand releases is a definite distraction here. For a band that could have reigned as garage rock rulers, this album holds almost no revelations and is not as exciting or original as early discs by the Seeds, the Blues Magoos, or the Electric Prunes. When Big Brother & the Holding Company proceeded without Janis Joplin, they at least had their original cosmic sound and a little help from their friends. With both Don Galucci and Jack Ely gone, renditions of "Shotgun," the Beatles' "A Hard Day's Night," "Stand By Me," "I Like It Like That," and Henry Mancini's "Peter Gunn" do nothing for the group, or for those classic copyrights. Another Lynn Easton composition, "The Climb," sounds like a rewrite of "Twist & Shout" by the Isley Brothers, and with their eventual Top Five hit "Jolly Green Giant"(not on this album) and its borrowing from the Olympics, it is obvious the band loved classic R&B. Too bad they couldn't inject it into their performances on record. Despite the lack of passion, "The Climb" ranks with "Annie Fanny" as the best two tracks to be found in the grooves of The Kingsmen on Campus. The five preppies in different colored sweaters on the front cover put things into perspective; this is the Grass Roots without Rob Grill or Warren Entner, and the record has little heart and less soul. But the album cover is a bizarre prediction of the success their biggest hit would have in the film Animal House and the frat rock label fits them perfectly. It isn't that "A Hard Day's Night" is the worst Beatles cover ever, it's just plain boring, as uninviting as a performance by some generic wedding band with Lynn Easton's sax going back and forth with the organ on the melody. The band had the potential to bang out some memorable garage sounds, but rather than give us jangly guitars and Jack Ely-style vocals, everything sounds so...pedestrian. For the real thing, pick up the Barbarians' first record, or better still, the four-CD Nuggets box...unless you'd like to hear some high school type band do a walk through of "Stand By Me."
1. The Kingsmen - Annie Fanny (2:05)
2. The Kingsmen - Rosalie (3:09)
3. The Kingsmen - A Hard Day's Night (2:21)
4. The Kingsmen - Stand By Me (3:46)
5. The Kingsmen - Little Green Thing (1:59)
6. The Kingsmen - The Climb (2:31)
7. The Kingsmen - Sticks And Stones (1:52)
8. The Kingsmen - Peter Gunn (4:45)
9. The Kingsmen - Sometimes (2:46)
10. The Kingsmen - Shotgun (2:37)
11. The Kingsmen - I Like It Like That (1:56)
12. The Kingsmen - Genevieve (2:30)
13. The Kingsmen - Get Out Of My Life Woman (2:47)
14. The Kingsmen - Don't Say No (1:56)
15. The Kingsmen - My Wife Can't Cook (2:13)
Posted by: D&J на 00:22