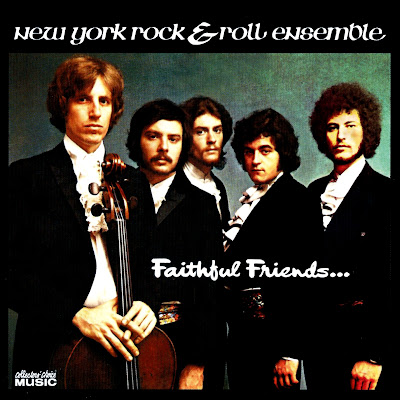 An apocryphal tale says Juilliard Music Conservatory-trained musicians Michael Kamen, Marty Fulterman, and Dorian Rudnytsky decided in the late '60s in New York that they could make bigger bucks as rock stars than as classical musicians. The results of this legendary experiment were inconclusive. Forming the New York Rock and Roll Ensemble, they broke with tradition on their first two albums -- 1968's self-titled debut and Faithful Friends the next year -- by using classical music instruments in rock songs and using rock instruments on classical pieces.

This fusion, daring at the time, impressed legendary conductor Leonard Bernstein so much that he invited the group to appear at one of his Young People's Concerts with the New York Philharmonic Orchestra. For their third Atco release, Reflections, they collaborated with Greek composer Manos Hadjidakis, best known for scoring music for the movie Never on Sunday. Rhythm guitarist Brian Corrigan departed after the third album, and pedal steel guitar player Hank Devito joined. The band then shortened its name to New York Rock Ensemble and switched to Columbia. Released in 1971, Roll Over was their most overtly rock album to date and their biggest seller, although they fell well short of Led Zeppelin on the Billboard charts. The band dispersed after Freedomburger, although Rudnytsky, Fulterman, and Corrigan had one final shot with Flattering Foe.... Devito surfaced years later as a stalwart player in the bands of Rodney Crowell and Rosanne Cash. Only Kamen fulfilled the original trio's objective of successfully melding classical and pop music to make big bucks. After being music director for David Bowie's Diamond Dogs tour, he went on to a thriving career scoring films. After his score for Brazil gained him wide exposure, he hit the mother lode composing music for the Die Hard and Lethal Weapon series. In 1991, Kamen earned an Academy Award nomination for "(Everything I Do) I Do it for You," the Bryan Adams monster international pop smash hit from Robin Hood: Prince of Thieves. Kamen has also worked with Eric Clapton, Pink Floyd, Liona Boyd, Sting, Rod Stewart, Metallica, Kate Bush, Belinda Carlisle, the Chieftains, the Cranberries, Roger Daltrey, Eurythmics, John Mellencamp, Jim Croce, and many others. 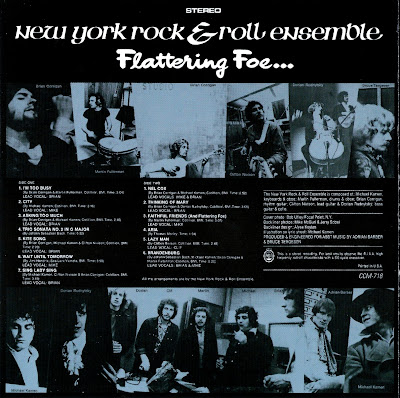 The second release from this rock-classical fusion act is a highly enjoyable, albeit forgotten, album from the 1960s. One of the first major bands to mix classical music with rock, the New York Rock & Roll Ensemble also included future pop composer Michael Kamen. The ensemble's 1969 sophomore album continues where their debut left off, with pop/rock numbers like "I'm So Busy" and a cover of Jimi Hendrix's "Wait Until Tomorrow" interspersed with straight classical pieces such as Bach's "Trio Sonata No. 2 in G Major." The album's highlight is the acoustic-based original "Kite Song"; a song featuring falsetto vocals from ensemble member Brian Corrigan and a very pretty cello melody. Most of the songs sound influenced by Sgt. Pepper's Lonely Hearts Club Band, as well as late-'60s pop/rock harmony-based groups such as Crosby, Stills, Nash, and Young. Kamen lends his dramatized vocals to most of the tunes on the album in pure Broadway meets '60s rock fashion; other members of the ensemble sing as well. While heralded at the time for their courageous musical explorations, the New York Rock & Roll Ensemble peaked with this and their follow-up album, Reflections, failing to capture the same magic on their subsequent releases
Posted by: D&J на 16:12