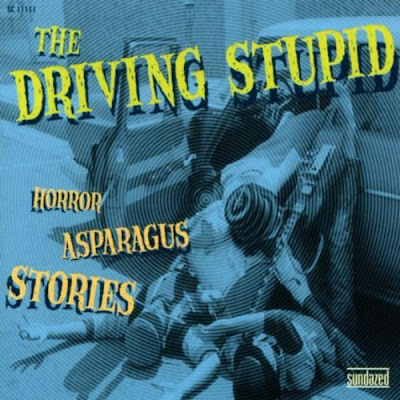 REQUEST
Driving Stupid (1966) Horror Asparagus Stories. Американские гаражники, справедливо относимые к адептам зачаточного прото-панка. Агрессивная подача, примитивные трехаккордные песни и откровенно эпатажные хулиганские тексты (достаточно обратить внимание на первый трек - My Mother Was A Big Fat Pig или на I'm Gonna Bash Your Brains) - что это, если не классические характерные черты панка? Несмотря на то, что это середина 60-х и среди песен есть и натуральный блюз The Reality Of (Air) Fried Borsk, и баллада How Do You Tell A Stranger, и кантри Happytime Springface And Flowers, и даже чтение стихов под акустическую версию Greensleeves (что получилось очень похоже на American Prayer), основные ассоциации при прослушивании альбома - с панком.
***
The Driving Stupid released just one single, "The Reality of (Air) Fried Borsk"/"Horror Asparagus Stories," which came out on the KR label and flopped in 1966. The band eventually attracted a notoriety way out of proportion to their accomplishments, however, when both songs were anthologized on the '60s garage rock compilation Pebbles Vol. 3 about 15 years later. The tracks are considered to be the apogee of stupid psychedelic garage rock, with their over-the-top juvenile absurd comedy. Some listeners would subscribe to the "it's-so-stupid-it's-brilliant" school; many would find the single unbearably amateurish and dumb. But of such things reputations are made, if only cult ones.
The Driving Stupid were formed on the East Coast by college students, three of them longtime friends from New Jersey. As more of a lark than a serious endeavor, in the summer of 1966 they drove from New Jersey to Hollywood in an effort to crack the big time, stopping off in Albuquerque, New Mexico to record some demos. They did manage to land a deal and record an album's worth of material in Hollywood, but the album didn't come out at the time, after the commercial death of the 45. This unreleased material, like the single, combined sloppy garage band rock with self-consciously silly lyrics, like a garage group providing the soundtrack for a Z-grade horror-science fiction film.
Most of the Driving Stupid left Hollywood at the end of the summer of 1966 to return to college. The single, plus 17 unreleased tracks from their 1966 adventures, were issued in 2002 by Sundazed on Horror Asparagus Stories. ~ Richie Unterberger, Rovi
1. Driving Stupid - My Mother Was A Big Fat Pig (2:47)
2. Driving Stupid - Rid The Lobsters (2:22)
3. Driving Stupid - Fast City? (2:10)
4. Driving Stupid - The Reality Of (Air) (1:52)
5. Driving Stupid - We've Come To Take The Earth Away (2:53)
6. Driving Stupid - Green Things Have Entered My Skin,Gladys (2:26)
7. Driving Stupid - I'm Gonna Bash Your Brains (2:30)
8. Driving Stupid - Water My Doing Here? (2:26)
9. Driving Stupid - Girl's Got A Turtle (3:05)
10. Driving Stupid - How Do You Tell A Stranger (2:52)
11. Driving Stupid - Happytime Springface And Flowers (1:39)
12. Driving Stupid - Greensleeves (3:30)
13. Driving Stupid - Fast City (Version 2) (2:17)
14. Driving Stupid - I'm going To Bash Your Brains In (Version 2) (2:41)
15. Driving Stupid - We've Come To Take The Earth Away (Version 2) (2:55)
16. Driving Stupid - The Reality Of (Air) (Version 2) (1:51)
17. Driving Stupid - Ride The Lobsters (Version 2) (2:13)
18. Driving Stupid - Green Things Have Entered My Skin, Gladys (Version 2) (2:20)
19. Driving Stupid - Horro Aspargus Stories (2:34)
The excavation of an entire album's worth of unreleased material by the Driving Stupid must have excited some die-hard garage-heads, though the result proved to be somewhat less thrilling than might have been imagined. The exact sources of each specific track are undocumented, but they're taken from their 1966 demos in New Mexico and the unreleased album they did in Hollywood the same year. Both sides of the "Horror Asparagus Stories"/"The Reality of (Air) Fried Borsk" single are included as well, naturally. But the reality of the Driving Stupid is that this particular brand of horror/science fiction/comedy rock isn't too funny or clever. Imagine a bunch of teenagers who barely know their way around their instruments, fueled by a steady diet of surf rock, Mad magazine, and monster and outer-space films, half-improvising songs in their suburban basement. That's what this sounds like, and though some might interpret that as a high recommendation, it's not. Frank Zappa and the Mothers of Invention these guys weren't, though those who get enormous kicks out of kitsch might enjoy songs about postmen putting spiders in mailboxes and the like, backed by the most rudimentary of riffs and over-excited sung-spoken vocals. They did actually try to get "serious" on a couple of occasions with the romantic ballad "How Do You Tell a Stranger?" and the deliberately Lovin' Spoonful-like "Happytime Springface and Flowers," and not memorably so. For those enamored of the "Horror Asparagus Stories"/"The Reality of (Air) Fried Borsk" single (which admittedly did include their best songs), rawer versions of each of those songs are here, along with an interview with lead guitarist Roger Kelley that does much to reveal the mysterious story of the group. ~ Richie Unterberger
Thanks a lot for remarkablewilly
Posted by: D&J на 17:15