Carol Hedges was a 16-year-old aspiring singer when she was discovered as the result of a talent contest in 1962. Backed up in the competition by Cliff Bennett's support group, the Rebel Rousers, she won the contest and Bennett got her together with producer Joe Meek. Hedges was recorded by Meek with his resident group, the Tornados, without achieving success. Luckily, a neophyte music talent manager named Robert Stigwood had also seen her and liked what he heard, and he ultimately took her away from Meek. He was impressed with Hedges' singing, a white soul sound similar to (though not as powerful as) Beryl Marsden's work, and also with the fact that her two musical inspirations were Billie Holiday and Sammy Davis Jr.. Stigwood renamed her Billie Davis and teamed her with Mike Sarne, another singer he had under contract, and the two scored a novelty hit in 1962 with "Will I What." For her solo debut, he gave her a song that he had heard on a visit to America. "Tell Him" had been recorded by the Exciters, but Davis' cover, released on English Decca, made the Top Ten in England in early 1963 despite the fact that the American original actually topped the U.K. charts at the same time. Davis recorded for both English Decca and Pye Records during the early and mid-'60s without ever duplicating "Tell Him"'s success -- the closest she came to another hit was in 1968, with "I Want You to Be My Baby." Some of her work was reissued on compilation CDs, including her cover of Burt Bacharach's "The Last One to Be Loved," which appears on Sequel Records' Trains & Boats & Covers. Billie Davis is fondly remembered in England by her early pop/rock success in the pre-Beatles era 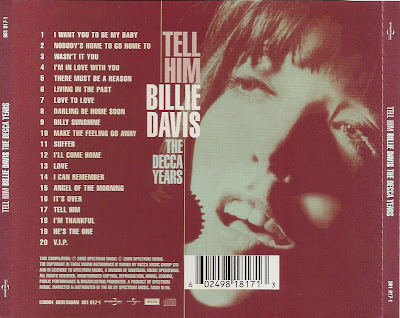