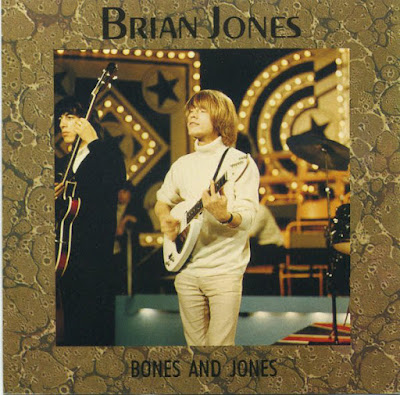 Brian Jones was second guitarist and multi-instrumentalist in the Rolling Stones from their formation in 1962 until just a few weeks before his death in mid-1969. He did not receive any individual songwriting credits for songs that the Rolling Stones recorded; he did not sing lead vocals on any of their records; and he was not a star guitar soloist. Nevertheless, he is more famous than any of the Rolling Stones except Mick Jagger and Keith Richards, and for good reasons. His attitude and stage presence did a good deal to help define the Rolling Stones' image in the 1960s, and his skills on a variety of instruments lent many of their records a diversity and eclecticism that the group would never match after his departure. He also did a couple of little-known recordings under his own name, although those were ones in which he was a composer or a documentarian, as opposed to a featured performer.

Jones was already a rebel who embodied the more flamboyant aspects of the Rolling Stones' lifestyle even before the Rolling Stones formed. As a teenager he got into trouble by fathering illegitimate children, and despite his high IQ, he shunned academic studies in favor of his passions for playing jazz and blues. In the early 1960s he was spotted by Keith Richards and Mick Jagger playing Elmore James-styled guitar while sitting in at an Alexis Korner gig. Jones moved to London and joined forces with Richards and Jagger to form a band, the Rolling Stones, who played their first shows in 1962. By most accounts Jones, a bit older than the others and more musically experienced, was at this point the band's leader and most important musical force.

By the time they made their first single in 1963, the Stones had settled into the five-man lineup that would carry them through most of the 1960s. In the first year or so of their recording career, Jones would continue to be the leader, if anyone was. Keith Richards was the band's lead guitarist, but Jones was less a rhythm guitarist than a second guitarist whose chords and riffs were counterpoints as much as support. Jones was also a good harmonica player (who helped teach Mick Jagger how to play the instrument), an excellent slide guitarist (best heard on the Stones' 1964 British chart-topper "Little Red Rooster"), and in the very early days a backup vocalist, although he would rarely function in that role after the mid-'60s. As the handsomest and most photogenic member of the group, he was also important to their image and making the band commercially viable. Jones was so determined to think of himself as the Stones' leader that he arranged to have himself paid five pounds more per week than the others for a while in 1963, which didn't go over well with the rest of the gang.

Brian Jones' influence in the Rolling Stones began to diminish in the mid-'60s, when Jagger and Richards began to establish themselves as the band's songwriters. Jones probably contributed to the several early Rolling Stones originals that were credited to the group pseudonym of Nanker-Phelge, but he never did have a song that he wrote, or co-wrote, under his own name recorded by the band. As a womanizer and heavy substance sampler, he helped set the pace for the Stones' bad-boy persona, but he also began to miss some performances and recording dates due to ill health and erratic behavior. His truly important contributions to the band lay in his facilities for learning numerous instruments and adding unusual, creative touches to Stones recordings that gave them a pop appeal, in the best sense. These included the sitar on "Paint It Black"; the dulcimer on "Lady Jane"; the marimba on "Under My Thumb"; the recorder on "Ruby Tuesday"; the piano on "Let's Spend the Night Together"; and the Mellotron on "2000 Light Years From Home."

Brian Jones Presents: The Pipes of Pan at JajoukaJones did a couple of low-profile solo projects, one of which was not released until after his death. He composed the soundtrack for the 1967 film A Degree of Murder, starring his then-girlfriend Anita Pallenberg, playing sitar, organ, dulcimer, autoharp, and harmonica. He also recorded traditional Moroccan musicians at the Rites of Pan Festival in Morocco in 1968. Excerpts of these were released in 1971 as Brian Jones Presents the Pipes of Pan at Joujouka. His interest in Moroccan music in all probability influenced the Stones' Their Satanic Majesties Request album, which occasionally employed African-style percussion and flutes. He was one of the first rock musicians to help expose this sort of music to Europe and North America, although it wouldn't be until the 1980s and 1990s that it gained an appreciable audience there. Jones also did some scattered guest appearances on other artists' records, the most famous by far of which is his jazzy saxophone solo near the end of the Beatles' "You Know My Name (Look Up the Number)."
Beggars BanquetIn the late '60s, Jones became further estranged from the rest of the band as some personal and physical problems made it more difficult for him to carry his weight on-stage and in the studio. A hand injury in 1966 affected his guitar playing, and although he did not go to jail for drug busts, because of his police record it was feared that he (and, thus, the band) would be unable to tour the United States. He lost his glamorous girlfriend, actress Anita Pallenberg, to Keith Richards. It is thought that his general ability to function was so impaired that he did not play on some of the sessions that produced the Rolling Stones' 1968 album Beggars Banquet, although that's probably him on slide guitar on "No Expectations."
Let It BleedJones played on a little bit of Let It Bleed, but before that album was finished, he left the Rolling Stones. On June 8, it was announced that he had decided to leave for musical reasons, although biographers have speculated that he was in fact fired by the rest of the group. Jones apparently had ambitions to form a band of his own, but on July 3, he drowned in his own swimming pool. The cloudy circumstances of his death have been the subjects of various theories over the years; some feel that he was murdered, other evidence indicates that it was an accident that might have been brought on by unwise combinations of substances and medications. The Rolling Stones, with Mick Taylor as Jones' replacement, went ahead with their planned free concert in London's Hyde Park on July 5, 1969, staging it as a tribute to Jones. 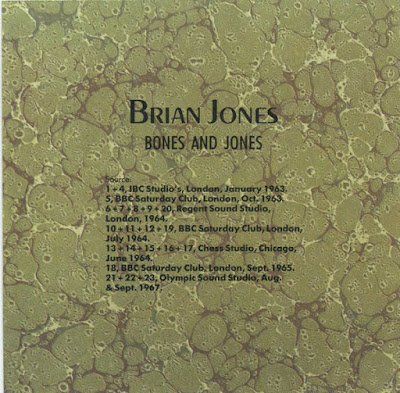 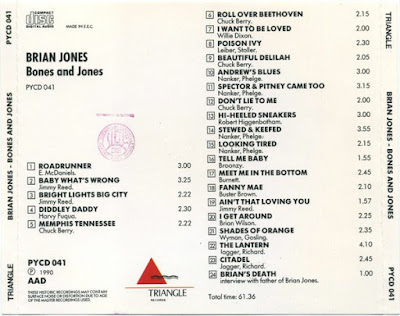