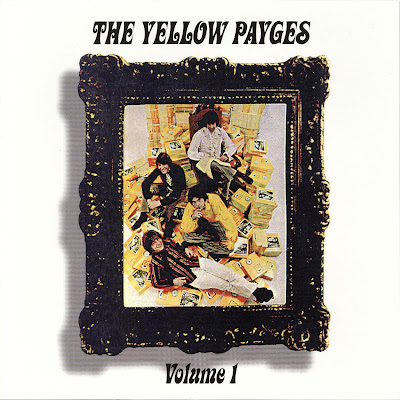 Garage rockers the Yellow Payges formed in Torrance, California in the fall of 1965 -- while attending a performance by friends the Palace Guard at the Hollywood club the Hullabaloo, vocalist Dan Hortter took the stage to sing a rendition of "I'm a Man," so impressive that club owner Gary Bookasta hired Hortter's own band to back the Newbeats two weeks later. The problem was, Hortter's previous band, the Driftones, had dissolved months earlier, but he quickly assembled a new Driftones' lineup including guitarists John Knox and Larry Tyre, bassist Herby Ratzloff, and drummer Terry Rae, also a member of the Palace Guard. Rae resigned almost immediately after the Newbeats gig, with drummer Dan Gorman signing on in time for the group to change its name to the Yellow Payges. They were soon playing the Hullabaloo on a steady basis, with Bookasta signing on as manager -- in 1966, Knox, Tyre, and Ratzloff exited, with guitarists Bob Norsoph and Randy Carlisle, and bassist Mike Rummans signing on in their stead. When Norsoph and Carlisle quit soon after, Rummans moved to guitar, with Jim Lanham briefly assuming bass duties prior to the addition of bassist Teddy Rooney, son of Hollywood legend Mickey Rooney. In 1967, this Yellow Payges lineup issued their debut single, the Showplace label effort "Never See the Good in Me" -- "Jezebel" followed later that year, and both records generated enough local buzz to earn the band a contract with major label UNI. In addition to releasing their label debut "Our Time Is Running Out," in late 1967, the Yellow Payges closed out the year as part of Dick Clark's Happening '67, a package tour which traveled to 45 U.S. cities in 45 days. In mid-'68, both Rummans and Rooney exited, with Hortter and Gorman quickly recruiting guitarists Bill Ham and Bob Barnes, both products of Fort Worth, Texas (a geographic quirk resulting in some confusion as to the band's actual hometown). On August 16, the Yellow Payges played their biggest-ever show, appearing at the Hollywood Bowl on a bill headlined by the Animals, the Rascals and Tommy James & the Shondells; they spent much of the year to follow supporting their singles "Childhood Friends" and "Crowd Pleaser" on tour with the Animals, later spending six months opening for the Beach Boys. The band's debut LP, Vol. 1, appeared on UNI in mid-'69, generating the singles "Never Put Away My Love for You," and "Vanilla on My Mind"; "Follow the Bouncing Ball" appeared in 1970, and their cover of the warhorse "I'm a Man" (a nod to Hortter's big break) fell just two slots shy of cracking the Billboard Hot 100. Somewhat ironically, it was a campaign with AT&T that spelled the Yellow Payges' demise: hired by Wall Street advertising firm Cunningham & Walsh as part of a phone company-sponsored campaign designed to appeal to young audiences, the band was forced to appear in commercials in yellow satin ruffled shirts, effectively destroying their credibility and their momentum. After one final single, "Moonfire," the Yellow Payges dissolved in late 1970 -- Barnes later backed Kinky Friedman under the alias Roscoe West, and also collaborated with T-Bone Burnett. 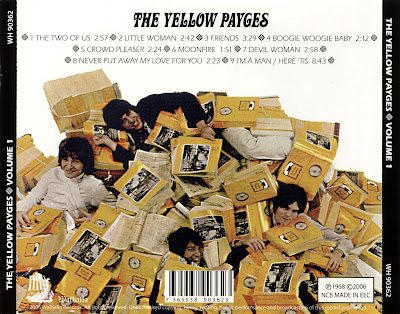