Steve & The Board - The Complete 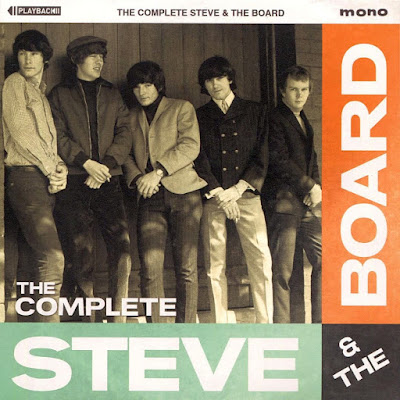 Steve And The Board was an Australian rock band formed in late 1965 and disbanded in May 1967.

Steve & the Board made some decent if derivative British Invasion-style records in the mid-'60s, getting some success in Australia with the singles "The Giggle Eyed Goo" and "I Call My Woman Hinges 'Cause She's Something to Adore." All the members were in their late teens when they recorded for the Spin label, and their progress was no doubt eased by having a lead singer, Steve Kipner, whose dad Nat Kipner was the head of Spin Records. The group wasn't a mere manufactured boy band, though, as in fact much of their material was original, contributed by several members (though most often guitarist Carl Keats). In their blend of British R&B and pop/rock influences, their recordings were fairly solid straight-ahead rock that criss-crossed attributes of the Beatles, the Byrds, Merseybeat, and raunchier groups like the Pretty Things. They issued just one album, though, and a couple of non-LP singles. All of their sides are available on the Ascension CD reissue of the Steve and the Board ...and the Giggle Eyed Goo album, which adds the non-LP 45 cuts.

Steve & the Board's album had included a Barry Gibb song the Bee Gees never released, "Little Miss Rhythm & Blues," and one of the Keats songs on the LP, "Lonely Winter," would be recorded by the Bee Gees. The Bee Gees connections would continue in some other post-Steve & the Board careers, and in fact might be what the band is most known for. Drummer Colin Peterson would join the Bee Gees for a while in the late '60s; his replacement in Steve & the Board, Geoff Bridgeford, would himself be in the Bee Gees in the early '70s. Steve Kipner went on to be part of Tin Tin, which had a number 20 hit in 1971 with "Toast and Marmalade for Tea," and recorded a late-'70s solo album for Elektra. He's more well-known, though, as a mainstream pop songwriter, his most successful creation being "Let's Get Physical." 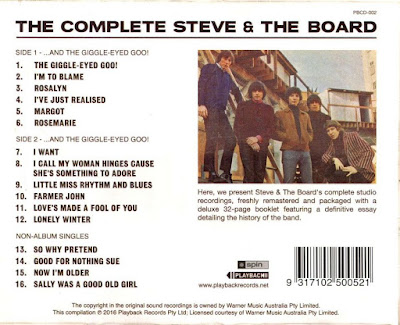