Jackie DeShannon - Come And Get Me; The Complete Liberty and Imperial Singles, Vol. 2 (@320) 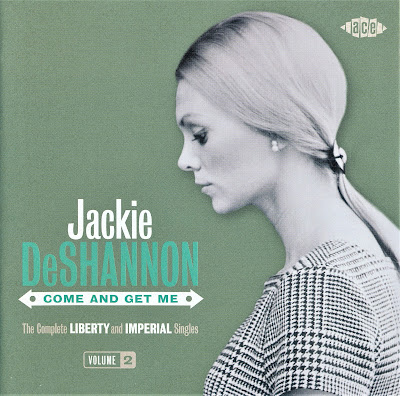 Come and Get Me: The Complete Liberty and Imperial Singles, Vol. 2 Review by Steve Leggett.

The second of three volumes from Ace Records collecting Jackie DeShannon's complete Liberty and Imperial singles from the 1960s, this set has all sorts of enduring little gems, including DeShannon's iconic version of Burt Bacharach and Hal David's “What the World Needs Now Is Love,” a stunning version of her own masterpiece “When You Walk in the Room” (a song so well written that it works no matter who is singing it), DeShannon's own rendition of “Come and Get Me” (a song she wrote for Marianne Faithfull, who had a hit with it), “Hold Your Head High” (co-written with Randy Newman), and “Splendor in the Grass” (co-written with David Amram), which features a cameo by the Byrds. DeShannon was -- and is -- the real deal, a singer/songwriter before the term was even coined. Her early singles crafted doo wop to intelligent lyrics. She dated Elvis Presley. She toured with the Beatles in 1964 and more than held her own. She wrote songs with Randy Newman and Jimmy Page. She sang with Van Morrison. She was among the first artists to realize that folk and pop could work together and was a behind-the-scenes innovator in the creation of folk-rock. And she did it all with style and grace, singing with a sexy, husky voice full of energetic passion and writing songs that gracefully belied the craft behind them. By all accounts she should be a household name instead of just a respected rock & roll footnote. Kudos go out to Ace Records for presenting the early evidence on her behalf, and for doing it in chronological order.

2. I'm looking for someone to love

5. He's got the whole world in his hands

11. What the world needs now is love

12. A lifetime of loneliness

15. Splendor in the grass

17. Will you love me tomorrow

26. I haven't got anything better to do