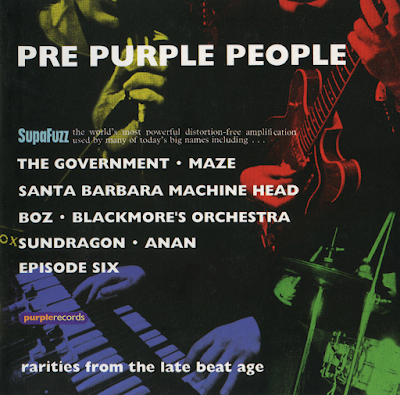 Review by Richie Unterberger
This anthology gathers 23 odds and ends that assorted one-time members of Deep Purple recorded before joining Deep Purple, sometimes as session musicians. As such it's more of a useful compendium of missing bits and pieces for Deep Purple fans than it is an even, high-quality listen, but musically it's not bad, with the occasional above-average cut. Ritchie Blackmore's represented by two Joe Meek-produced instrumentals on a rare 1965 single, as well as session work on a couple of Bob Dylan Basement Tapes covers that ended up on a 1968 single by Boz (aka Boz Burrell, who eventually joined King Crimson and Bad Company). Blackmore's also heard on an unremarkable lightly psychedelicized 1968 pop single by Anan, and Blackmore, Ian Paice, and Jon Lord play on four 1968 songs by Sun Dragon, again in a jaunty psych-pop style that's heavier on the pop than the psych. More interesting are four rarities by Episode Six, the 1960s British Invasion band that included Ian Gillan. That band's catalog is well-represented by a couple of other CDs, but this quartet of tunes is not on those. "Have You Ever Been There" is a previously unreleased folk-pop ballad by Roger Glover; "Love Hate Revenge" is heard in its American single version, with a different psychedelic instrumental break of weird oscillating sounds; and "I Am a Cloud" and "I Am the Boss," taken from a March 1969 radio broadcast, are different from the versions that show up on the Episode Six compilation The Radio One Club Sessions. Santa Barbara Machine Head was an early supergroup of sorts featuring Ron Wood, Jon Lord, and drummer Twink, although their three tracks (previously on the compilation Blues Anytime, Vol. 3) are routine heavy blues-rockers. The Maze, with Paice on drums, made subpar harmony pop on the 1967 single included here. Finally, the Government included future Deep Purple singer David Coverdale; the four songs here were on a self-pressed 1971 EP, consisting of unremarkable heavy horn-rock covers of hits by Chicago, the Boxtops, Cher, and the Rolling Stones.
Pre Purple People (Rarities From The Late Beat Age) 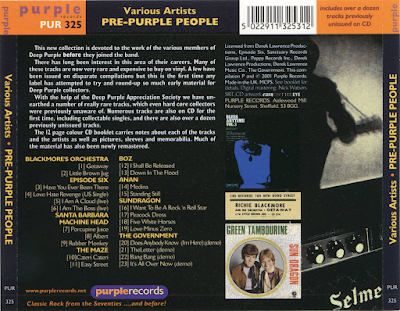