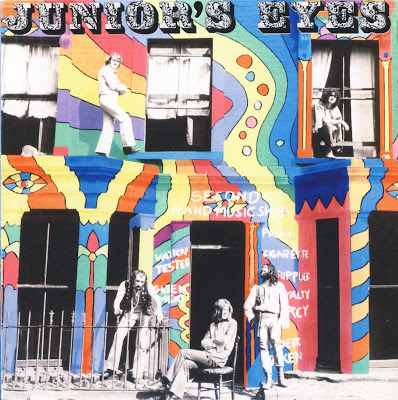 REPOST
This is a tribute music space for the band Junior’s Eyes. Founded by Mick Wayne in London, 1968, with Steve Chapman on drums and Honk (John Lodge) on bass, they quickly signed a record deal with Denny Cordell/Tony Visconti Productions. They were managed by Blackhills (T.Rex, Pink Floyd, etc.), who organized the Hyde Park concerts. Junior's Eyes first gig was with Traffic and many other gigs and benefits followed closely, such as the Marquee, Roundhouse and Middle Earth in London and then various venues and festivals up and down Great Britain and Europe including Star Club Hamburg and Beat Club TV in Bremen. In 1969, they recorded their only album 'Battersea Power Station'. Grom (Graham Kelly) joined them on vocals and Rick Wakeman was added on keyboards. John Cambridge who had earlier been in the Hullaballoos with Mick, replaced Steve Chapman on drums, whilst Tim Renwick was added on guitar. The band however where not to stay together for long. Mick had been playing sessions for various people, including James Taylor, Joe Cocker, David Bowie ("Space Oddity") and following the demise of the band he was adviced by his managers to move to Los Angeles to continue his career. At Leon Russell's studio he recorded a new album. This master tape contained performances by various L.A. musicians, but was subsequently stolen from Island Studios, London. In 1972, Mick came back to London and recorded with Joe and Sandy Denny, Steve Winwood and Ringo. He also went on to play and record with the Pink Fairies, Tim Hardin, and Phil Collins. Tragically though he died in a house fire in the USA in 1994.
http://www.myspace.com/juniorseyes1
Mick Wayne - guitar, vocal
Tim Renwick - guitar
John Lodge - bass
Graham Kelly - guitar
John Cambridge - drums
Junior's Eyes are one of the more well-known unknowns -- if such an oxymoron can be applied -- of the late-'60s British psychedelic scene. Most people who have seen any reference to them at all are apt to know them only as an act that served as David Bowie's backup group briefly in the late '60s. Mick Wayne, Junior's Eyes' lead guitarist and songwriter, played guitar on Bowie's "Space Oddity" and some of Bowie's other recordings. Prior to forming Junior's Eyes, he had briefly been in the Hullaballoos, a lightweight British Invasion band that had a bit of success in the States. He had also been in the Bunch of Fives with ex-Pretty Things drummer Viv Prince. As part of the Tickle, he wrote their sole 1967 single, "Subway (Smokey Pokey World)," one of the greatest obscure psychedelic 45s. He also played acoustic guitar on James Taylor's Apple album.
All of these interesting peripheral contributions might lead one to suspect that Junior's Eyes' 1969 album, Battersea Power Station, could be a hidden nugget of psychedelia. But although it is well-respected by some cultists, it's actually a letdown, with a very ordinary if somewhat eclectic assortment of tunes (all penned by Wayne) which reflect the British scene's juncture between psychedelia and hard rock/progressive rock. The melodies aren't memorable, the intricate song structures tend to make one's mind ramble rather than intrigue, and there's an overall sense of pedestrian ploddiness, in spite of the ambition of much of Wayne's songwriting.
Other than Wayne, Junior's Eyes' personnel was variable during its brief existence. Members of some note who played in the lineup at some point included drummer John Cambridge, who went on to another David Bowie backup band, the Hype; guitarist Tim Renwick, who much later would play with Pink Floyd; and Steve Chapman, who later played drums with Poco. After Junior's Eyes broke up in early 1970, Wayne went on to session work and a stint with the Pink Fairies. Battersea Power Station was reissued on CD by Castle in 2000, with the addition of three non-LP singles, four demos, and both sides of the Tickle's 1967 single.~ by Richie Unterberger (allmusic) 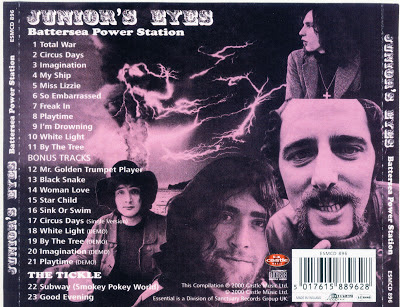 Mick Wayne undoubtedly tried hard to be significant and progressive with his songs on Junior's Eyes' sole album. There were meter changes, skilled psychedelic hard rock guitar riffs, and moods both whimsical and cynical throughout. Although the predominant vibe was bluesy psych-prog, there were also quieter, more acoustic interludes. It doesn't add up to much without memorable hooks or vision, though, and the record fails to stick as a noteworthy effort, even by the standards of obscure late-'60s British psychedelia. If you disagree with that assessment, or in any case are still curious enough to track down this collectable release, the 2000 CD reissue on Castle couldn't possibly be a more thoughtful package. In addition to the songs from the original LP, it contains both sides of their three non-LP 1968-1969 singles, four demos of songs from Battersea Power Station, and both sides of the 1967 psych-pop single by the Tickle, Mick Wayne's previous band, along with very extensive historical liner notes. Aside from that Tickle single, the extra material doesn't contain anything too interesting, though a few of the 45 tracks are rather poppier in approach than most of the album. Unintentionally, no doubt, the Tickle gem "Subway (Smokey Pokey World)" blows everything else on the disc to smoke.
Posted by: D&J на 00:04